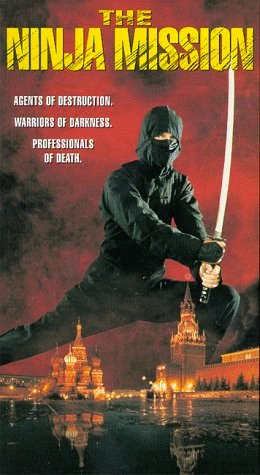 
Dr. Markov (Broberg) is a scientist who looks a lot like Raymond Burr. He has developed some sort of alternative energy source and is guarding his discovery with his life, literally. The KGB kidnap him and his nightclub singer daughter Nadia (Hanna Pola in her only credited role to date), and the CIA do the one logical thing the CIA might do in a case like this: they unleash a Swedish ninja to clean up the mess. Complicating things are some UN jerk named Abelman (Hans Rosteen, also a one-timer) and a crazy Russkie named Ivan (director Helge). Sure enough, lots of silly intrigue ensues, in between the action scenes, of course. Will the ninja complete his mission? Find out today!

The Ninja Mission is an acknowledged cult classic, and, impressively, one of the top-grossing movies ever to come out of Sweden. Worldwide, surely it made a large profit from its low budget. For those that think the only director of merit to come from Sweden is Ingmar Bergman, behold the great Mats Helge.

While he improved upon The Ninja Mission with his later Russian Terminator (1989), there’s plenty to admire about this particular ‘Mission. The whole thing looks better than some of Helge’s other efforts, thanks to some higher-tier widescreen photography with some nice lighting schemes (when they’re not too dark, that is). Sure, there may be some stilted dialogue/ADR work, and even though the plot doesn’t make much sense (not that we’re complaining about that), Helge still feels the need to put in a ton of silly, unnecessary dialogue scenes explaining everything. He continued this with Russian Terminator.

Also to admire the fact that Helge threw caution to the wind and figured ninjas need not be Japanese. It was the 80’s Ninja Boom after all, and movies like this gave it a special cache. 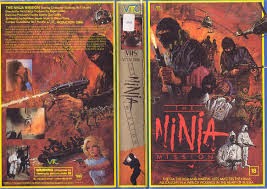 But perhaps we’re burying the lead here. We should have started by using the now-classic phrase “Fat Swedish Guy Punching Ninjas”. That’s all you need to know, really. But it clearly seems all the attention and energy went into the action scenes, and that makes sense, because that’s why we're all here in the first place, right? On top of some rather wacky ninja fights, there are some classic throwing stars, car chases, and a lot of  gun-shooting.

Even though they’re regular guns, they make a laser-style blip - not ‘pew pew’, the budget might not have allowed for that - here it’s simply a short, curt ‘pew’. Why the guns make this odd noise is never explained. Unlike everything else, which is over-explained (yet makes no sense). See what we mean?

A lot of the violence was saved for the climax, and it is indeed a doozy. There’s also the Prerequisite Torture, and the 80’s vibe is strong and powerful. This comes across well in the nightclub scene, when Nadia (wearing a killer outfit), for rights reasons channels her inner ‘Bat Penatar’ with her tune “Baby You Ran Away’. But, perhaps, in the end, Director Helge decided the hero was too young, virile and capable, and for his next ninja outing got an elderly Kenny Rogers lookalike to do all the hard-hitting action. God bless him for that.

We’re not sure if every VHS edition is cut, but we believe most, if not all the 80’s releases are, including the one on Media. It’s important, should you choose to buy this movie, that you get the DVD edition, as it’s uncut, and the violent bits are the most entertaining bits for the most part, and the movie would be a heck of a lot duller without them. It’s a shame to think people watched versions like that throughout the years, but it didn’t stop the movie from being a big success.

Imagine if they saw the uncut version from the jump - the movie would have been huge! Additionally, it should probably be pointed out that a Jeanette Jaquelle is credited as a continuity girl, but her credit is misspelled as “Continuety Girl”. Perhaps she wasn’t paying attention. But, after all, it’s the “English As a Second Language” charm that, truly, in the end, keeps The Ninja Mission and other Helge movies afloat. At least for us.

Despite some slow passages, The Ninja Mission is deserving of its cult status and has some great moments. We’ll continue to champion the work of Mats Helge if we can get a hold of any more of it.

This is indeed a classic. The original Swedish and Finnish VHS tapes were also seriously cut. According to some sources, the Swedish Ninja was the inspiration for Cannon to make American Ninja. Legend says that Mats Helge's whereabouts are unknown since he has for years been on the run from the Swedish IRS.

Wow! That is great information and very interesting. The Swedish IRS should cut him a break for having a great "canon" of films.

I would highly recommend the Swedish documentary "Regissören som försvann - historien om The Ninja Mission". It's about the production of Ninja Mission and about Mats Helge's life and career. A couple of funny anecdotes mentioned on there is about Jean-Claude Van Damme wanted to be part of the movie. Since during the early years he asked around for various available acting gigs. The other one was about David Carradine being constantly drunk on-set for the three MHO movies he was part of. The makers of the documentary was trying to get in touch with him, but never seemed to find him. One of his last known locations was that he lived somewhere in the United States. Mats Helge Olsson is no longer wanted by the Swedish IRS, since over a couple of decades ago. Why he has never returned to Sweden is unknown. A YouTube channel dedicated to him has uploaded all of his movies.