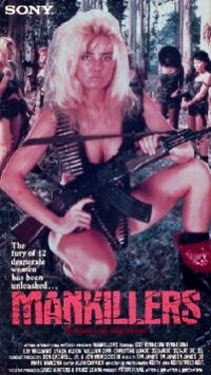 
John Mickland (Zipp) is one very bad dude. He’s a drug runner, murderer, white slave trader/human trafficker, and will torture you with a chainsaw if he doesn’t like you. So, with that information in hand, CIA agent Rachael McKenna (Aldon) begins the hunt for Mickland. With only the logic of “women are more effective in the field”, she tells her superiors she needs a battalion of 12 women. She goes to the local prison and rounds up some babes, telling them if they help her on this dangerous mission, they will be freed.

The women agree and begin an intense training regimen. When their training is cut short, the inexperienced women and their leader must face off against Mickland and his many minions with the odds stacked even further against them. Will they be the ultimate MANKILLERS? Find out today...

Once again, David Prior and AIP take a basic idea and draw it out to 90 minutes or so, with a rock-bottom budget, and manage to make it work. Sure, most of the plot, as it is, of Mankillers (AKA 12 Wild Women), is lifted from Hell Squad (1986), but no matter. The idea is now done up in true AIP style. People get shot. Cars get chased. Drug deals go wrong. People of both sexes have mullets. Of course, there’s a training montage to a Steve McClintock song, in this case, a number called “Freedom”. There’s another memorable tune, “Stand Tuff” by Jimmy Hammer. You know it’s the 80’s because they spelled it “Tuff”. Interestingly, Bainbridge Scott is in both Mankillers and Hell Squad. Coincidence?

Speaking of the 80’s, one of the major reasons to watch Mankillers is the hair, makeup, and outfits of the “12 Wild Women”, though most of the time they’re in some kind of quasi-military garb, though tarted up, of course.

Technically it all counts as “sexploitation”, supposedly, though there is no sex or nudity. The violence is all pretty equal opportunity: women get beat up and killed, but they also beat people up and kill them. William Zipp chews the scenery - the cheap, cheap scenery (we mean that lovingly) - to shreds as Mickland, the most “boo-hiss” baddie to come down the pike in a long time. AIP mainstays Fritz Matthews, Sean Holton and, naturally, Ted Prior all worked behind the scenes in various capacities, reinforcing the family-style vibe of AIP productions. Even when Ted isn’t in the movie, he’ll still help out.

So while the movie is most notable for its bevy of babes, it should be noted that it also contains one of the few roles of the great American hero Craig Alan - Commander himself. So if you can’t get enough of that inimitable AIP style, feel free to give this “girl power” entry a watch.