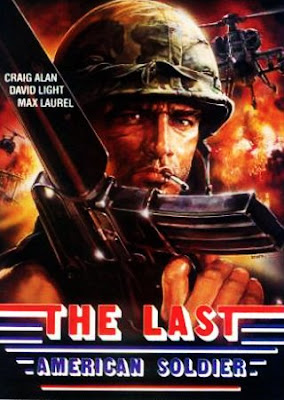 AKA: The Last American Soldier


Wow! Now here’s a hidden gem if there ever was one. Commander (AKA Last American Soldier), we can safely say, is one of the best - if not the best - Exploding Hut movie of all time. Probably more huts explode (along with just about everything else within a 100-mile radius) in this movie than in any other Exploding-Hutter...COMBINED. The plot, if there even is one, is nothing more than a simple excuse to perhaps win a Guinness World Record for the most jam-packed kaleidoscopic cornucopia of blow-ups, explosions, detonations, fireballs, firebursts, fireblasts, combustions, ignitions, flare-ups, and, yes, cannonades ever committed to film. And if you think there isn’t a difference between all these things, Commander will show you the subtle nuances, and the whole outing gives new meaning to the band name “Porno for Pyros”!

For starters, we have true American hero Craig Alan in the lead as Commander. He’s a one-man army of epic proportions, an unshaven, beer-swilling killing machine who’s so macho he makes Arnold Schwarzenegger look like Richard Simmons. His voice sounds like a narcoleptic Elvis. At the end of every line he utters, you’re just waiting for a “thank yuh, thankyuhverymuch.” But he cares very much about freedom, and if he has to slaughter entire regions to make his dream of freedom happen, then, so be it.

Evil Russians and commies have to get what’s coming to them. And speaking of Arnie, don’t get confused - the title Commander isn’t meant to recall any other movie titles, surely. Actually, if this movie brings anything similar to mind, it’s high body count-classics like No Dead Heroes (1986). 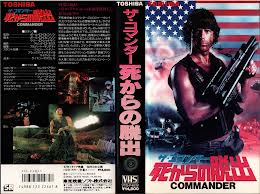 It should also be highlighted that his name is Commander, which leads to actual dialogue such as “Commander seems very efficient.” Evidently his rank is Sergeant, which would mean his name is “Sgt. Commander”. That alone makes this movie worth seeing. God bless losses in translation. Of course, the director, Ignazio Dolce, also directed Last Flight to Hell (1990), which, as we all know, had a great 'sceenplay'.

Mike Monty has very minimal screen time as a Major, but that doesn’t stop Commander from getting into a conflict with him. Apparently all this is happening some time after the Vietnam war, and Commander is helping the people of Southeast Asia to be free, before the commies can take over their villages.

He has a girlfriend of sorts named Cho Lin (Gomez), but a lot more time is spent on the Prerequisite Torture than on any time with her. In between blow-ups, there’s some shooting. Then some more shooting. And maybe a few knifings. For extra added spice, there’s some neck snaps. But it’s all about the explosions (helicopters certainly included), and this movie delivers, and then some. It makes Hollywood pap like Blown Away (1994) look like Larry Crowne (2011). And it’s all set to a quality Simon Boswell score. How can you lose? 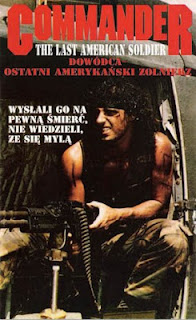 Criminally, Commander was never released on VHS in the U.S. Evidently it only came out in Greece, Brazil, and, of course, Japan (they get everything). Based on that kind of poor decision-making, is this even a country Commander would want to serve? We didn’t even release COMMANDER for God’s sake. Well, what the world needs now - RIGHT now - is this movie. In our wimpy, wussy, overly-PC, “Gun Free Zone”, safe space, wet-noodle, touchy-feely culture, Commander stands as a raging, double-middle-finger “F-you” to all the liberal sludge polluting our lives. Craig Alan is our new hero, and he will be yours too when you see this utter classic of the action genre. This movie just rules. See it ASAP.

I've got the Jap VHS and the great German blu-ray of this one! Amazing that a film like this got blu-ray release anywhere.

Nice! That's great you have both. This is a classic.

Explosive Action: How does the blu ray picture quality compare to the version Amazon has available for streaming?

jmichaelkober: You asked me this already, either on another video or in my inbox, but as I replied there I don't have Amazon streaming (I'm not in the US) so I wouldn't know. The blu looks good though.

Thanks for the feedback!