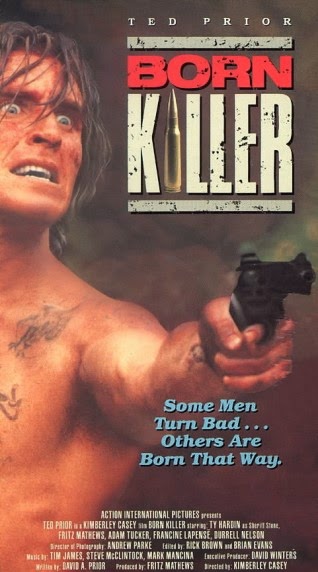 Spencer (Prior) and Anderson (Tucker) are two convicts breaking rocks in the hot sun as part of a prison chain gang. When Nick (Matthews), his buddy Trapper (Nelson), and a gaggle of their female friends get carried away with their paintball shenanigans, they accidentally drive into where the chain gang is. Spencer and Anderson see this as their chance to escape, so they do. Soon enough, the two criminal masterminds steal Nick and Trapper’s clothes, leaving the paintball enthusiasts with only prison duds to wear.

This really sets off Nick’s ‘Nam flashbacks and he gears up for revenge. Meanwhile, Sheriff Stone (Hardin) is hot on the trail of the baddies - only he and his fellow law enforcement officers think Nick and Trapper are the culprits. As Spencer becomes more and more psychotic, and it’s getting harder and harder to tell which are paintball guns and which are real ones - this sets the stage for the final confrontation. Who is the real BORN KILLER? Find out today...

Here we have AIP’s entry into the then-popular PGW, or “Paintball Gone Wrong” sweepstakes. Director Kimberley Casey, who has served in various capacities on many AIP films, turns in a classic low-budget AIP entry. It helps if you know and already are a fan of that particular AIP style, but try to imagine a cross between a Hell on the Battleground (1989) or Jungle Assault (1989) crossed with the David Heavener vehicle Kill Crazy (1990), with a large helping of Fear (1988). It even starts out with some classic, Soultaker (1990)-style early ‘90s partiers driving. There’s a ton of shooting, usually ending up in that “blood mist” type of shot. Even though the plot is minimal, there still seems to be a bit of filler.

This is also one of those cases where the actors look like other people. Ted Prior really looks like Christian Bale here, and Matthews looks a lot like Roddy Piper, but the winner in the lookalike stakes is clearly Ty Hardin as Sheriff Stone, a dead ringer for Ted Turner. Are we really sure this isn’t Ted Turner under an assumed name? It’s amazing this movie never played on TNT. Or maybe CNN. Okay, maybe it’s not, but at any moment you think the proceedings will stop so he can get married to Jane Fonda and eat a “beefalo” sandwich.

Even the songs resemble others - as much as we love Steve McClintock’s music, he is very adept at soundalikes, and here he turns in a very Bryan Adams-esque number with “Keep this Motor Runnin’”. Of course, there’s a montage to the music, whether it makes sense to do so or not.

It’s also nice to see Ted Prior as a baddie, and he takes full advantage of the opportunity with a twitchy, eye-rolling performance. And because the characters are playing “paint games”, as they’re called here, presumably that justifies the fact that for the last third of the movie, everyone is shirtless and covered in red paint.

Once you get into the AIP spirit, you’ll see that Born Killer is just entertaining enough for that sort of style.

This glorious hunk of rudeness was the end of an era for the legendary team of Prior-Prior-Matthews in my opinion. Prior's ludicrous facial expressions when Fritz shoots him multiple times have to be seen to be believed.

Can't agree more. Prior was ridiculous as usual.

This is an average AIP. It seems like they were starting to run out of steam in their Alabama jungle slog oeuvre.

I expected an average AIP jungle slog, but the crazy cast improved on the average plot. I incorrectly said that the AIPs were filmed in Alabama in my previous comment. They are, of course, California jungle slogs.

This was a solid AIP entry. Jungle slogs have been made all over the world, from California to the Philippines, what sets them apart are the cast and director. So AIP entries will have that weird feel.