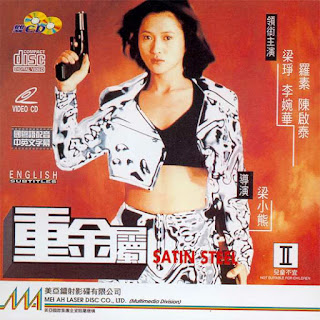 
Jade Leung (evidently as herself, as she is portrayed by...Jade Leung) is a female Hong Kong Cop On The Edge. As she is a fearless and take-charge officer, her higher-ups put her in charge of the case of a lifetime - stopping the illegal, international arms dealings of a Mr. Fowler, a classic super-evil white guy.

To accomplish her mission, she must travel to Indonesia and Singapore, all the while teaming up with Ellen Cheng (Lee of Tiger Cage 2 fame), a fellow policewoman/beauty. Together, the two face all kinds of scrapes, from local, indigenous, bulletproof (?) shamans, to keeping control of the classic “disk”, to a fighter with a bionic arm. But the men in their lives are causing complications as well, as they are wont to do, and our heroes also have to deal with Ken Chan (Wong), and a guy who calls himself Jean-Paul Belmondo (Chan). Will our heroes be more satin or more steel? Find out today...

We tracked down Satin Steel because it is directed by a man named Siu-Hung Leung, who directed fan favorite Superfights (1995), as well as Bloodmoon (1997), so we wanted to see more, especially from his earlier Hong Kong period.  Satin Steel has been described by others as a female Lethal Weapon (1987), but Lethal Weapon didn’t have the cartoonish, at times wacky vibe (note the muzzle flashes, which essentially are cartoons). Naturally, that fun, high-energy HK style is on display most of the time. Not that it doesn’t flag at a couple of points, but that’s only natural. Jade Leung and Anita Lee make a great team, and this was only the first movie Leung had been in after debuting with Black Cat (1991) and Black Cat 2 (1992). 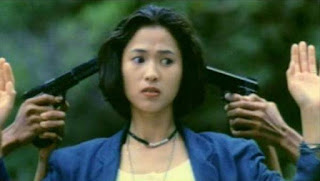 Hon-Kam Lee delivers a rockin’ theme tune and his music helps things along well. The fact that the movie overall is well-shot, with interesting locations, has plenty of Martial Arts action, blow-ups, and top-quality stuntwork, as well as silly humor, not to mention the beautiful and talented leads, mean Satin Steel is never anything less than entertaining.

It even includes a classic workout montage. The film stands on its own as a HK action outing, produced during a time (the 90’s) when it seemed Hong Kong was really cranking them out. Not that they didn’t produce some of the greatest action of all time, but there were so many, some tended to get lost in the shuffle. At least today, we can shine a light on Satin Steel and give it some love.

Hong Kong action fans, especially those who love female protagonists, will no doubt be very interested in Satin Steel.