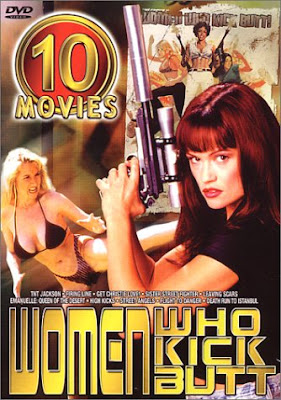 
Frank Adams (Saunders) is a wisecracking L.A. cop with an attitude. The Phantom (Strauss) is an evil crime lord with a large gang of baddies at his disposal. Before the Phantom and his minions can take over the streets, Adams decides that the one and only way to deal with the escalating crime situation is to pluck three women from prison, Tamara, the blonde one (Hengstler), Betina, the brunette (Lauren), and Anya, the redhead (Somers), and train them to be crime-fighting machines. After the death of his partner Murph, Adams is really mad, you see. After protecting the neighborhood for a while, they come to be called the “Street Angels”, much like Curtis Sliwa’s Guardian Angels. Or perhaps Charlie’s Angels. Some kind of angels, anyway. Will our new heroines/hero be victorious, or will they be just more victims for The Phantom?

Here we have a no-budget, shot-on-video item, or NBSOV for short. It appears Street Angels was shot on a standard-issue camcorder of the day, and it’s a lot like the movies we would make with friends - but, thanks to Vista Street Entertainment, a specialist in downmarket product, this made it into video stores!

We don’t know how many, exactly, but we wonder if anyone rented it, saw the amateurish technical qualities, and stuck with it until the end. We sure did, as we always do, and once you get past the obvious drawbacks, the first hour is actually pretty entertaining. It has all the cop cliches we know and love, including a BYC (Black Yelling Chief) - this time played by DTV trooper David Jean Thomas, who appeared in No Code of Conduct (1998) and Retrograde (2004), to name just a few. Imagine all the classic tropes you know and love, but seemingly made for zero dollars by a bunch of enthusiastic teenagers. After the first hour, the movie starts to drag and the novelty wears off, however. With some better pacing, things could have improved a lot for the duration of the running time.

The movie is not quite Samurai Cop (1991), but it seems to be yearning in that direction. Instead of Amir Shervan and Matt Hannon, we have actor/writer/director/co-producer George Saunders, who wears a tanktop that reads “Fight Crime” and gives himself humorous (?) dialogue and sensitive narration. Is it tongue-in-cheek or meant to be taken seriously?

It’s very hard to tell. The villain, The Phantom, works out in his weight room while drinking a Bud Light and wearing sunglasses and tight jeans. He also appears to be homosexual, which was an interesting character choice for the main baddie. Of course, there’s a training sequence, the expected Prerequisite Torture of the hero, some abrupt and completely out of the blue Punchfighting, and more, but it starts to get repetitive after a while. There are even references to contemporary events, such as Desert Storm and the L.A. riots, which add cultural context, but it still doesn’t answer the questions of how this got into video stores and who rented it?

We’re used to junkiness, as well as the Mankillers (1987)/Hired to Kill (1990)-style plotline, and the time-honored Street Corner Justice (1996)/Annihilators (1985)-style “cleaning up the community” plotline, which got us to thinking about an imagined remake. It would feature Michael Madsen as the hero, Brian Thompson as the baddie, and Angie Everhart, Elizabeth Berkley, and...someone else as the girls. Generally we’re against remakes, but a strike against Street Angels is the lame ending. We would change that. Though Dee Hengstler, who played Tamara, was in an episode of Cop Rock, so she’s not completely expendable. She’s got at least one for the win column.

Ruta Aras, writer/director of High Kicks (1993), was thanked in the end credits, and both Street Angels and High Kicks are both found on the Women Who Kick Butt DVD collection. Which companies are working behind the scenes to make this stuff happen? If you’re a fan of forgotten SOV’s in the bleedingskull.com tradition, you will most likely enjoy Street Angels. If you require concepts such as professionalism and traditional notions of quality in your cinematic entertainment, steer clear.