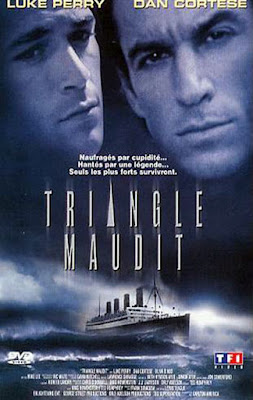 
When a guy named Stu (Perry) invites his buddies Tommy (Cortese) and Gus (Hewlett) - as well as his girlfriend Julia (Shannon) - to the Caribbean island of St. Sebastian, he figures it will be fun, sun, and smooth sailing on the high seas. Unfortunately, Stu is strapped for cash, so he can only afford to charter a rusty old tub of a vessel, run by Captain Morgan (Harewood) (groan). Fortunately, a local lady named Charlie (D’Abo) who works as a “First Mate for Hire” is also there to keep things in line.

The only problem: sensitive soul that he is, Dan Cortese - er, I mean TOMMY - is having persistent visions and nightmares of a boat-related trauma in the past. There’s also some voodoo. Compounding all the supernatural evil is the fact that our shipmates are all in the general vicinity of a Bermuda-based triangle of some sort. Who will escape the trials and tribulations of THE TRIANGLE?

Evidently fearing that MTV Sports was stifling his creativity, here, finally, national treasure Dan Cortese boldly steps out in a movie bearing his name. He’s top-billed with Luke Perry, their two names and faces acting as the proverbial siren song, drawing video store patrons toward the DVD. Much like the Bermuda Triangle itself, once you’re caught in the spell of these two magical Himbos, you can never escape.

Director Lewis Teague knows a thing or two about casting - he was the man who cast Jay Leno as an action star in Collision Course (1989). We all remember how Leno shot first and asked questions later, especially as it related to brutally slaughtering Randall “Tex” Cobb’s character. So now the casting acumen of Teague shines once more by shrewdly marshaling the services of one Daniel Cortese when he had so many, many other people he could have chosen. Apparently Eric Nies wasn’t available. 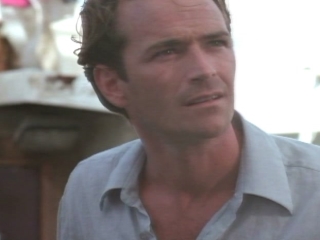 Despite looking like he’s not quite comprehending what’s going on around him, Cortese here is portraying a lawyer. Like any good attorney, his powers of observation, deduction, and logic come to a head when, after our heroes are plainly neck-deep in supernatural goings-on, he astutely offers, “This place is whacked!”. Thank you, Mr. Cortese. Thank you for that. But, in his defense, he does bend metal piping with courage and conviction, and he also has special Cortese-powers of precognition or something. Cortese’s presence can’t help but remind us all of Short Fuse (1986) and its star, Art Garfunkel. 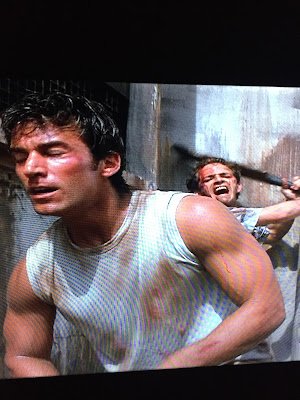 Sharing the screen with Cortese is Luke Perry, who apparently was supposed to go psycho Shining-style, but it happened at the drop of a hat and wasn’t set up very well (maybe he was in a rush to get back to West Beverly to attempt to complete his fourteenth year as a high school Junior).

The presences of D’Abo and Shannon were welcome, but the whole outing becomes dull and routine and they can’t save it. Hewlett is the token “wacky friend”, though he does take what may be the first-ever selfie in cinematic history. Pros: the movie is well-lit and you can actually see what’s going on. Cons: Marlin-fishing stock footage, green-screen “explosions” and CGI weather. WEATHER! That may be the lowest low since Driven’s CGI quarters.

Finally, there’s a poster in the background of one scene that appears to be advertising for a rapper named President George Bush. Now that’s a rap name. Also there’s an evil voodoo spirit that we can only guess is named “Bockadoo”. At least that’s what it sounds like. Now you can see what we’re up against here. Rather than getting released to theaters, to DVD, to VHS (they were still doing that in 2001, right?), or to HBO or other services, The Triangle was released direct-to-TBS SuperStation. Even the awesome powers of Luke Perry and Dan Cortese can’t rescue the shipwreck that is The Triangle. It should be easy to avoid this slow-moving vessel.

This film was so fucking boring, Luke Perry was a lot more entertaining in that thriller with Ice-T and Amy Locane called "The Heist"

Can't agree more. This was very slow and just plain dumb. But Cortese was funny.

As well as the very bad acting from one of the participants when our heroes interrupt the ceremony, there's also the question of why that never had anything to do with the main plot!

In one shot you can see a map of Barbados, which plays the fictional island of St. Sebastian (I lived there for many years and recognised a lot of the locations).

Haha! You're right. The voodoo part was dropped for ghosts silliness. But Dan Cortese was ridiculous to watch.