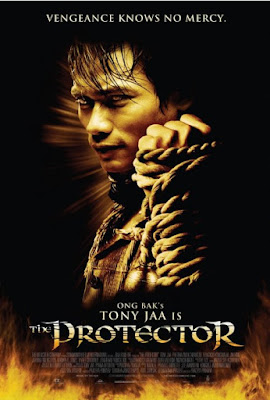 
As part of a centuries-old tradition in Thailand, certain people take on the duties to protect their all-important - and perhaps even sacred - elephants. These special people are known, naturally, as Protectors. Raised in rural Thailand as a Protector, like his father before him, Kham (Jaa) takes his responsibilities seriously - VERY seriously. When an unscrupulous gangster named Johnny Yai (Nguyen) kidnaps Kham’s two beloved elephants, Kohrn and Por-Yai (yes, the elephants have names), Kham travels to Sydney, Australia to find them and bring them back home.

Teaming up with a Thai cop named Mark (Wongkamlao), Kham has to fight wave after wave of baddies who really take their elephant-napping to heart. It’s all being controlled by whip-wielding gangstress Madame Rose (Xing). Will Kham battle his way through the meatheads and retrieve the elephants?  Find out today!

Tony Jaa is just the Man. When it comes to Martial Arts fights, stunts, and choreography, he is arguably the best of his generation. What this man can do is unbelievably great and highly impressive. He gets the utmost respect not just for his considerable natural talent, but for his refusal to use wires or stunt doubles during fight scenes. His penchant for long takes is hugely appreciated and stands as the 180-degree opposite to the annoying “quick-cut” trend of today.

The word on the street is, unfortunately, he has bad management that force him to do a lot of stupid movies and he went kind of nuts. He’s kind of like the action movie equivalent of Dave Chappelle. Of course, this doesn’t diminish him in any way. 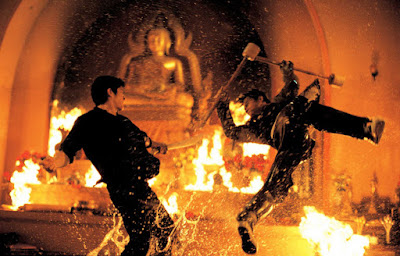 The plot, simple as it is, shows a fascinating cultural difference that we really enjoyed. In most movies, a disc of some sort would be the sought-after item. In this case it’s elephants. The fact that elephants are so central to the Thai culture, and thus such a driving, motivating factor for the characters, was fascinating. To us Americans, it doesn’t seem like that big of a deal, but we had to get over that and delve into the Thai mindset as best we could. Add to that the highly-impressive fight scenes and a fruit-cart boat chase, and you get sucked in to the movie quickly and effectively. There’s even a boat-induced exploding helicopter. We don’t think we’ve ever seen that before.

Of course, there are some time-honored action movie clichés we all know and love (besides the fruit-cart chase and the exploding heli), such as the wacky taxi driver, the warehouse fights, etc. Of course, to viewers of Ong-Bak (2003), the whole structure will seem very familiar: Tony Jaa goes to a new and unfamiliar city in search of something important to his culture, and has to fight a ton of people in the process. Rather than criticize this, we applaud it. So many action movies have overly-complicated plots that don’t serve the movie well. The Protector and Ong-Bak have nice, simple plots that clear the way and leave enough room for Tony Jaa to do his thing. No fuss, no muss. Finally.

Sure, there is some shooting and a few blow-ups, but, thankfully, the talent of Mr. Jaa is given an excellent platform here. He really shines as he fights not just the “cannon fodder” type of goon but also other fighters with various levels of expertise: some of his opponents are simply labeled “Capoeira Fighter” (Crowder) and “Wushu Fighter” (Foo). Of course, he also has to take on a small gang of meatheads, but he has a secret weapon up his sleeve…

We can see all the countless hours of blood, sweat and tears that went into making this movie, and it certainly doesn’t go unnoticed or unappreciated. For a top Martial Arts viewing experience, we heartily recommend The Protector.