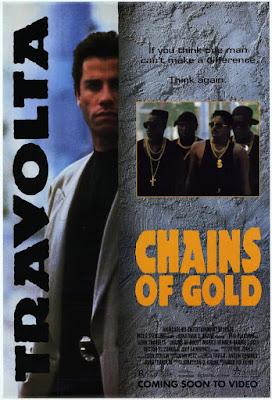 Scott Barnes (Travolta) is a Miami-area social worker whose problem is he cares too much. He left his former life of working in advertising and being an alcoholic behind so he could try to make a difference to the downtrodden. He becomes personally involved in the life of 13-year-old Tommy (Lawrence), becoming almost a father figure to him. When Tommy is kidnapped by a local supergang, cleverly called the “Youth Incentive Program” - because it doesn’t sound like a gang name - and they force Tommy to work around the clock packaging crack into vials, Scott Barnes gets mad.

After, of course, trying to get help from the local authorities - Sgt. Falco (Casey) and Lt. Ortega (Elizondo) - and failing, Scott Barnes does what only Scott Barnes can do - he summons all the awesome power of social work and goes on a rogue, one-man mission to free Tommy from his CHAINS OF GOLD! Of course, there’s also a love interest (Henner), and the final confrontation with arch-baddie Carlos (Bratt). Will Scott Barnes be the new action hero for the 90’s? Find out today...

Because it stars Joey Lawrence and John Travolta, it’s “Whoa!” vs. “Aw Geez!” in the cinematic team-up you always wished would happen, and actually did. Sure, this was made in the “dark period” immediately preceding Pulp Fiction (1994) for Travolta - but he seems to be giving his all, and you really care about the plight of Scott Barnes. He’s the social worker we all wish we had. Naturally, during the course of his social work, he gets into car chases, foot chases, shootouts, punch-ups, gets tortured, and gets thrown into a pit of alligators. Like any good drama about the hard life of a social worker, there is a pit of alligators. 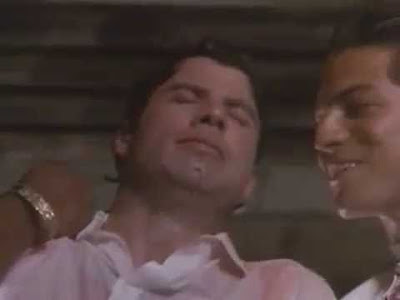 Though this reference may only make sense to die-hard fans of our site, Chains of Gold is a bit like a cross between Liberty and Bash (1989) and Short Fuse (1986) - with the only difference being that this time around, when Travolta sees a local Hispanic hoodlum steal a briefcase from a pedestrian, he slickly tries to blend in with the streets and says “hey, ese, give me the case!” You see, Barnes is an X-treme social worker who smokes cigarettes, puts his life on the line for his clients, and, to prove he’s a good influence on Tommy, he spends time with him breaking windows with rocks at a building in the area.

Bernie Casey is also here as a cop who is close to retirement - no surprises there - but instead of the classic scene where the Chief tells a rogue cop to turn in his badge and gun, there is a similar scene where Barnes’s boss dismisses him, but because he doesn’t have a badge or gun, he just leaves. He spends his time undercover with the YIP gang, the members of which think it’s such a badass name, they get YIP tattoos to prove their loyalty. This might be the first recorded instance of not a COTE (Cop On The Edge), but a SWOTE (Social Worker On The Edge).

It’s great to see Terl himself get in on the action - Travolta even gets a co-writing credit on the film (presumably he pressured the other writers for more chances to say “aw geez!”).  In most of the movies on this site, there is usually an explanation for why the hero has such advanced fighting skills - he’s a former cop, ex-military, previously a bounty hunter, U.S. Marshal, black belt in several different forms of Martial Arts, or left the Navy SEALS because it wasn’t challenging enough. Something like that. Not so here, which is what’s so funny about Chains Of Gold - no explanation is ever given for why Scott Barnes thinks he can take down a thousands-strong street gang and enter into gunplay and hand-to-hand combat with hardened criminals. I guess it’s all part of the “sparkle” of Chains of Gold.

So for a serious drama about social work, look elsewhere...wait, no. Look HERE. Thanks to the magic of the direct-to-cable, R-rated John Travolta action drama, we think we found DCF’s next recruiting video.

Funny review. I worked in a video store for most of the 90s and remember taking this home one night when I'd worked my way through all the new releases about cyborgs. I thought it was quite good. Travolta is an engaging performer and carries the movie. Thanks for reminding me about it!

No problem, happy you enjoyed 'Gold as much as we did. Thanks for your comment, write back any time.

P.S. we also worked in a video store in the 90s-00s and we all know that there's a lot of hidden gems to discover.

Travolta's done some great underrated action flicks in his time and this one is good for a few laughs. His recent 'I Am Wrath' revenge flick should be seen to be believed. He stars alongside Chris Meloni as an ex black op whose wife is killed by nefarious types, leading to a one man crusade. It staggers the mind that movies of this stature are still being churned out in 2016.

Sounds like a decent actioner. Will have to check that out, sounds like a good team up: Travolta and Meloni.