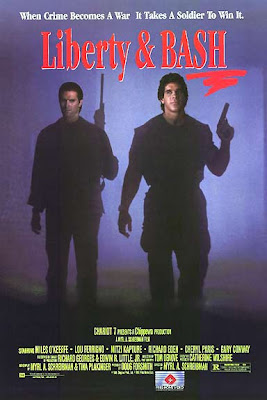 Directed by: Myrl A. Schreibman


When we first heard that there was a movie called "Liberty and Bash" in which Miles O'Keeffe played Liberty and Lou Ferrigno played Bash, we had the only natural reaction: "this is gonna be awesome". It is with a heavy heart that we have to report that "Liberty and Bash" is a crushing disappointment that doesn't even come close to fulfilling its potential.


The plot, unfortunately, involves a street thug named Jesse who runs afoul of some baddies led by a Mr. Big-type hotshot uncreatively named "Mr. B". He seeks help from a social worker named Liberty because they were buddies in the past. Liberty then teams up with Bash who works for a Big Brothers-Big Sisters-type organization. Meanwhile, Liberty's girlfriend (Kapture) is pregnant and that causes some tension between them, blah blah blah.


Despite what you may have heard, this movie has NO ACTION. This movie is so offensive because it shows a contempt for its intended audience (which is presumably action fans). The makers of this film are completely clueless as to how make an even halfway-decent action film. It is mostly talking, and talking about things that the audience couldn't care less about at that. This movie is mainly about social work! SOCIAL WORK I TELL YOU!

One funny thing is that Liberty is always referring to his "kids". These so-called "kids" are in their late thirties/early forties, if not older. He deals with "troubled gang kids" at the East Hollywood community center but it should be called "Old brothers, senile sisters". One of the funniest "kids" is an Asian man named "Juan Ton". Yes, Juan Ton. He calls everyone "Homes" and you can't help but laugh.

That's the nicest thing we can say about this cinematic abomination. Another big crime it commits is that there is little-to-no Bash. Ferrigno is in the movie for a total of about five minutes. He doesn't bash anybody. He motivates kids in a cheap, makeshift gym to climb the ropes. He does utter the line "YOU-WILL-LEARN-LIFE-IN-AN-EFFECTIVE-WAY", however. A sad fall from the legendary Billy of Cage (1989) fame.


The synopsis on the back of the VHS box, on the front of which has Ferrigno's and O'Keeffe's heads pasted on other people's bodies for some reason(shamefully released by Fries home video in the U.S.) proudly proclaims: "sizzling in its scope, dynamic in its depiction" and "A pounding pace and non stop action provide the thrilling ingredients for LIBERTY AND BASH". First of all, it's "non-START", nonexistent action. Secondly, Street Asylum (1990) did a better job of portraying the toughness of L.A. life at that time.

And thirdly, A slow-as-molasses pace, pointless, unending exposition, NO ACTION, and a parade of men in ill-fitting shirts in various states of unbuttonedness add to the hell of enduring this crud.


This should be retitled STUPIDITY and BAD.

There's a Tango and Cash joke here somewhere, I just can't come up with it ...