Casey Bowman (Adkins) is the lone white student at a dojo in Japan, among a class studying the ancient art of Ninjitsu. His father was stationed in Okinawa as a G.I., and this is the only culture he knows. When a fellow student, Masazuka (Ihara), attacks Casey in anger during a sparring exercise, he is banned from the school by the sensei. Naturally, that drives him to become an evil ninja who uses hi-tech weaponry and does the bidding of an evil cult in America. Meanwhile, the sensei entrusts Casey and fellow student/love interest Namiko (Hijii) to protect something called the Yoroi Bitsu, the historical ninja outfit and weaponry.

They travel to New York City and proceed to fight waves of baddies to protect their honor and the Yoroi Bitsu. Things get complicated after Casey and Namiko are arrested by NYC cop Det. Traxler (Jensen), but eventually the inevitable happens: the final showdown between Casey and Masazuka. Who will be the ultimate NINJA?

Entertainment and good times abound with this throwback to the 80’s Ninja Boom. Fan favorite director Florentine is at the top of his game as he delivers action-packed fights and well-choreographed action (along with his trademark “whooshing” sound effects), while frequent collaborator in front of the camera and fellow fan favorite Scott Adkins is also in fine form. Adkins is always enjoyable to watch, and when he’s put in roles like this, he can really shine. No wonder there was a Ninja 2 (2013) - fans clearly wanted more, and we can see why.

Like any good action movie, Ninja actually has a strong, central hero in Adkins (and his trusty sidekick Hijii) as well as a super-evil baddie. Ihara makes a great foil for Adkins as he plays the bad ninja - the guy who was expelled from the dojo and proceeds to break from ancient ninja tradition by using cheats like night-vision goggles. Ninja - the movie - deserves credit for actually trying to imbue the plot with history and true ninja tradition. There’s a (comically fast) scroll at the beginning informing us of the history of Ninjitsu, and a few re-enactments as well. This sets the stage for the action we are about to see. 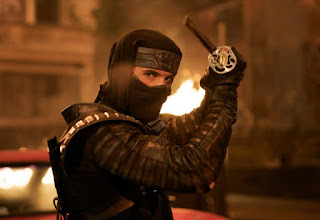 Ninja delivers the goods - cool ninja violence and a panoply of engaging fight scenes. If we have ONE criticism it’s the over-use (or use, period) of CGI - and because it’s Nu Image, we all know what this looks like - but Ninja gets a pass because all the rest is good, and because it’s in that Florentine style we all know and love: exaggerated motions and big, oversized actions. And there’s plenty of real Martial Arts and stunts as well. So, it’s all good. We’ll let the CGI stuff go in this instance.

Plus, Masazuka is the first Cyber Ninja we’ve seen since…well, Cyber Ninja (1988). He’s also a Cyber Ninja with a machine gun. This is awesome. We haven’t seen a ninja with a machine gun since Ninja III:The Domination (1984), so, it was more than welcome. We also liked the wackier elements of the plot, such as the Temple cult. What made it great is that it wasn’t needed at all, but it was totally welcome. A final observation: in the onscreen title at the beginning of the movie, in the word NINJA, the “A” is a throwing star. We need more clever, cool details like this in movies. Though due to their censorship and hatred of throwing stars, it’s likely that in the UK this movie is called NINJ. We’re imagining it crudely crossed out with a crayon.

In the final analysis, this particular Florentine/Adkins collaboration has cranked out another winner and kept DTV from going into the doldrums for the time being. Not everyone could have pulled from the Ninja Boom well and done it so successfully, so, they deserve credit.  It’s a fun and enjoyable watch, and we recommend it.

This is a modern-day classic, as is its sequel. There seems to have been a renaissance of classic action movies after Stallone's comeback: Ninja 1 & 2, The Raid 1 & 2, Redeemer, Skin Trade, etc.

As a huge fan of Cannon Films, I was extremely looking forward to this movie. After multiple views, it still holds up exceptionally well. I think the movie did a solid job of nodding to ninja tropes of yore while giving the genre a face lift.

As you mentioned, the action scenes are very well shot and the chemistry between Adkins and Florentine is legit. I can't tell you how many movies I've seen with those two name on the DVD cover, but I can tell you it's plenty -- and they always deliver.

As good as it was, I actually feel the sequel is superior, if only for the sole reason that most of the fighting in "Ninja 2" was done in the ninja costume. Throw in a Kosugi, and it's ninja gold!

Roger: Can't agree more with your comment! Lots of solid action movies are being made. We loved The Raid 1 and 2. Breathtaking action.

Joe: Thanks! Absolutely! When Scott Adkins and Florentine are teaming up, you know it's going to be a solid actioner.