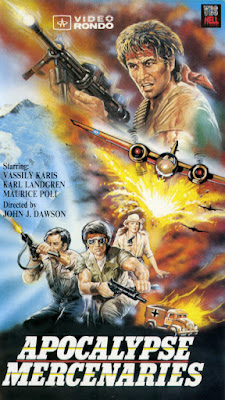 During World War II, a special team is assembled to fight the Nazis, their mission eventually leading them to a cave in Yugoslavia where they are to find and kill more Nazis. There’s Felipe Hierro (Landgren), the musclebound Rambo guy with heavy duty weaponry, Abraham Bridges, the explosives expert who blows up bridges just for practice, whose nickname is Priest because he carries around a Bible and makes up verses of his own, Mikhail Hertz, a surgeon who is also a German translator, Liam O’Connell, AKA Flyer, who can fly any plane and also is a radio expert. They’re all commanded by Captain Tony Hale (Karis), whose nickname is simply “Mister”. Along the way they get into plenty of scrapes with the baddies, but will their unique brand of teamwork win the day – and World War II?

The whole thing starts with a montage of shooting and blow-ups from this, and perhaps other, movies, then begins the beloved “assembling a team” structure we all know and love. It was nice seeing that during WWII, which we don’t see too often. Speaking of that, Karl Landgren as Hierro was the type of guy we’re used to seeing in the 80’s – a meatheaded, unkillable hero with big guns and snappy one-liners – but this time he appears in the 1940’s. So that was nice to see. In other words, instead of an Italian jungle-set Vietnam movie, just relocate that to WWII, and there you have it.

While there are plenty of blow-ups, shootings, and guys with flamethrowers, there are also some moments that are underlit and hard to see. Also, there are slow moments – we think this is because our heroes are fighting random, faceless Nazis, and there’s no one, lead, super-evil baddie. There should have been one of those to help focus their mission. Consequently, there are scenes where not much happens, which are interrupted by other scenes of one of the heroes looking through binoculars and seeing footage from another movie. But there is some nice cinematography in the current footage, and the Stelvio Cipriani score, as usual for him, enhances the proceedings. 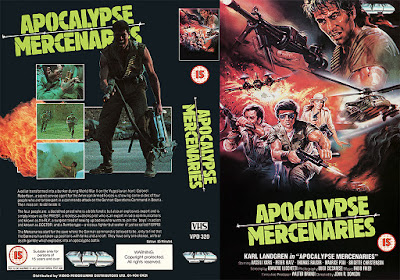 At least the heroes have their own, individual personalities, which lead to some pleasantly quirky moments. Perhaps the best is when the elderly troop leader, commanding our heroes from a secret bunker, gets confused and demands to know, and we quote, “what the fradge is going on”. It’s a reasonable request and one that we all have the right to know. Perhaps it’s like a cross between a refrigerator and fudge.

After the film came out in 1987 and had a subsequent VHS release in 1988, it only came out in various European territories and, of course, Japan. It never had a U.S. release at the time, but came out here only in 2009 when it was featured on the very confusingly-titled “Inglorious Bastards 2 Hell Heroes 4 Inglorious Film Collection”, put out by Video Asia. This is the same company that released the similar “Mercs” box set, and the quality level is about the same. We’re not complaining about that, because VHS quality never bothered us (we actually treasure it), and we’re lucky to see these rare films to begin with. Like a lot of the other movies in these collections, it has Japanese subtitles. Speaking of that, the Japanese VHS box art  strongly features Karl Landgren as the main star/hero in the fashion of the 80’s, and downplays (if not downright erases) the team aspect of it all. Perhaps they were hoping Landgren would become the next George Nichols.

In the end, Apocalypse Mercenaries is fine, decent, not bad, and fairly middle of the road. It won’t blow your mind like an exploding hut, but you certainly won’t hate it either. It has enough good moments to keep it afloat, and fits in well with other Italian-made, low-budget war epics of similar ilk.

I couldn’t summarise the movie better than you did in your last paragraph, perhaps only point out that the movie is widescreen on the DVD. I guess we’ll see reviews of the rest of the movies in the box set soon then.

Those are definitely coming up soon with Warbus 2 and and Inglorious Bastards 2.