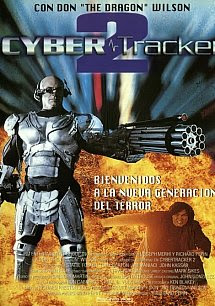 
Fan favorite Don “The Dragon” Wilson is back cybertracking once again for the explosive sequel which is classic PM and classic 90’s. This time around, Eric Phillips (Don), a Secret Service agent in an L.A. of the near future, has his hands full when a super-evil baddie named Morgan (De Longis) creates “Kill-Trackers” in his underground lair (judging by other PM movies such as Executive Target, PM really loves baddies with underground lairs). Morgan has twisted cyber-tracker technology for his own evil ends. He even goes so far as to make Kill-Trackers that are doppelgangers of Eric and his wife Connie (Foster), who proceed to rampage around the city killing everyone in sight, including plenty of cops. The husband-and-wife duo is now on the run and fighting for their lives, so they team up with the loopy Tripwire (Kassir), the solid Swain (Tony Burton) and awesome-dude Jared (Steve Burton, probably no relation to Tony). There’s a good-guy ‘Tracker named #9 (Maniaci) who looks nothing like Robocop. Will our heroes stop the chaos and destruction? Will Eric get home in time to finish his leftover Pizza Hut pizza? Find out today!

Cyber-Tracker 2 is fast-paced fun and a near-constant stream of shooting, blow-ups, fights, and car chases. It’s PM doing what PM does best. There are even multiple iterations of their trademark “car flipping over another flaming car and blowing up in the middle of the street” stunt which we all love and enjoy. And the movie wouldn’t be complete without at least one exploding helicopter. It all starts with a great warehouse-set counterfeit-money-deal-gone-wrong which not only includes copious amounts of gun-blasting and explosions, but – because it’s the future – LASERS as well. You know you’re in for a treat when you see the lasers come out.

You also know you’re in for something special when you see noted meathead Nils Allen Stewart and his hairstyle – completely bald except for a braided rattail. He then proceeds to get into a fight with Don and we’re on our way to total entertainment. Don is as likable as ever, and De Longis as Morgan puts in a wonderfully scene-chewing performance as the over-the-top bad guy. Don even has some rather deep conversations with his wife, who, perhaps presciently, doesn’t trust cyber technology. That causes conflict because not only does #9 save Don’s life, their holographic maid (is that what she is?) from the first movie, Agnes (McIntaggart) returns, who makes their lives easier and better. Don even tutors a young girl in Martial Arts, who proceeds to strap on a VR helmet and kick the heads off of cyber-ninjas (or, to be precise, virtual ninjas). If this doesn’t scream 90’s, we don’t know what does. 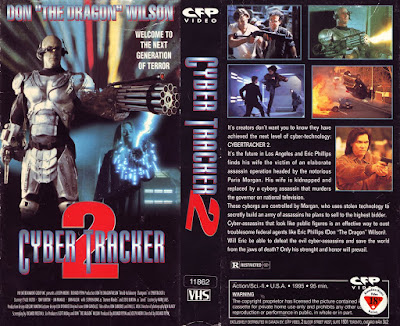 Naturally, this reminded us of Comeuppance Classic The Protector (1999), which also had a robotic female helper, in that case named Gertrude, and also featured VR ninjas. But Cyber-Tracker 2 has at least two things The Protector doesn’t – exploding Mr. Potato heads (made of plastic explosive), complete with the yellow glasses, and an evil Kill-Tracker made in Morgan’s lab that strongly resembles This Old House star Bob Vila. This fearsome creature can only be described as “CyberVila”. Unfortunately, CyberVila doesn’t get as much screen time as he so richly deserved. It’s never too late for Cyber-Tracker 3, however. We think Lou Diamond Phillips could be involved.

When you get right down to it, movies like Cyber-Tracker 2 are what this site is all about – classic 90’s DTV with explosions galore and a VR-infused ‘gotta love the 90’s’ vibe. Long live Don “The Dragon” Wilson, long live real, non-CGI explosions, and long live PM! We remain your humble servants, and thank you for all the enjoyment you’ve provided over the years.

I totally agree, and think that part 2 is better than the first one. PM always seemed to hand over the futurist projects to Richard Pepin (Firepower, T-Force, Hologram Man, etc.) while Joseph Merhi handled the contemporary ones (Last Man Standing, To Be The Best, Rage, etc.).

Would love to watch Death Fighter. Wanting to see it drop on a streaming service soon. We'll definitely check it out.