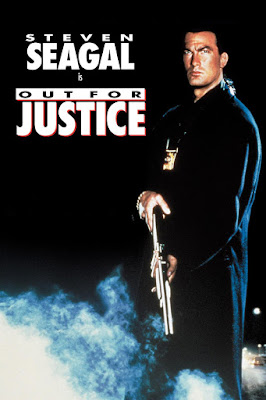 
Detective Gino Felino (Seagal) is Brooklyn born and bred, and Brooklyn to the bone. While he and some of his buddies from the old neighborhood such as Bobby Lupo (Spataro) became cops, others became wiseguys and took up the Italian gangster lifestyle. When psychotic, drug-abusing thug Richie Madano (Forsythe) guns down Lupo in broad daylight and in front of his family, Gino, to use Brooklyn slang…isn’t happy. (Keep in mind we’re not from Brooklyn).

Having disappeared, Gino is certain Richie is still somewhere in Brooklyn and won’t leave its confines, so he turns the borough upside down looking for him. Gino has his foot in two worlds, as he utilizes police compatriots such as Captain Donziger (Orbach), as well as gangsters such as Joey Dogs (Corello) in order to find him. Throughout his search, he encounters many characters, everyone from Richie’s sister Patti (Gershon) to gangster Bochi (Lasardo), but is anyone safe as Gino goes….OUT FOR JUSTICE?

Out for Justice is Seagal at his absolute best and has proven itself over time to be a classic of 90’s action. Lest you think we’re a bunch of Seagal haters, we’re not; we’re just disappointed by the way his career trajectory went in later years.

If he had maintained the high quality put forth here, we’d be some of his biggest cheerleaders. It’s a mainstream Hollywood production, so everything is lit and shot well, and all the technical aspects are very professional, as you might expect. Anyone only familiar with Seagal’s output from the latter third of his career will be shocked by what they see here: he’s actually ACTING, i.e., playing a character other than himself. And he does a fine job as Gino, even speaking Italian in many scenes. He gets a nice intro to his character as befits an action star, and it’s all just a modern updating of the time-honored “some kids from the neighborhood became cops and some became gangsters” plot we’ve seen since the early days of Hollywood. But it’s done well, with verve and excitement. 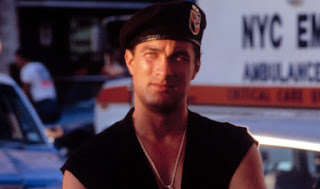 John Flynn is one of the most underrated and underappreciated directors of his era, having consistently turned in tough movies such as this, Nails (1992), and the all-time classic Rolling Thunder (1977). As our society became more and more wussified, the style of directors like Flynn fell out of favor in Hollywood, and that may explain why his name isn’t mentioned more often.

According to our research, Warner Brothers insisted this movie have a three-word title, and the formula held true – Out for Justice was Seagal’s third straight number one at the box office. Needless to say, in the late 80’s/early 90’s Seagal was hot property, and this is the result of that clout – a well-produced tough-guy movie with a lot of beatings and shootings, that isn’t overlong and moves at a nice clip. The whole package works. 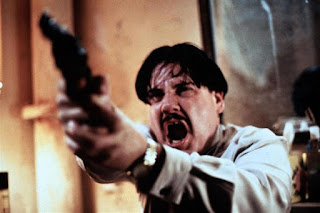 Seagal is backed up with a great cast as well – Jerry Orbach plays a character identical to the beloved Lenny on Law & Order, so this is the closest we’ll get to seeing Seagal as a cast member.

Fan favorite William Forsythe plays the baddie with a deranged strength, making him sort of a 1991 version of James Cagney as Cody Jarrett in White Heat (1949). Gershon puts in an energetic performance, and all the cops, gangsters, and family members help to complete the picture. Future Skinemax stars Shannon Whirry, Athena Massey, and Julie Strain also make brief appearances.

It’s also fascinating to see the Brooklyn of 1991 compared with the Brooklyn of today. Back then it was gritty, unpretentious and unglamorous, a perfect setting for an action movie. It’s hard to imagine Seagal and Forsythe battling their way through young hipsters with skintight jeans and tattoos wandering around playing Pokemon GO on their iPhones. It’s no wonder we continually retreat back to the age when Seagal was cracking heads with pool balls and throwing people out of windows.

As for the music, Seagal co-wrote two of the songs on the soundtrack, “Bad Side of Town” and “Don’t Stand in My Way”, along with Todd Smallwood. Smallwood did some of the other songs without Seagal, which may have led to his working on the soundtrack of Street Knight (1993) with Jeff Speakman. It must be a nice life, being an action movie song composer. In the end, Out for Justice remains a highlight of Seagal’s career and 90’s action as a whole.

Comeuppance Review by: Ty and Brett
Posted by Ty at 6.3.18

Out For Justice is one of the best Seagals, especially the production quality and cinematography shine in comparison with contemporary action cinema. Seagal’s beret-and-vest look is rather hilarious, though; it would have been better for a henchman in an El Presidente movie.

This is Seagals finest hour. His output up until Under Siege was the stuff of legends, but this masterpiece takes the cake. When I was 15 me and my brother watched this every day, reciting scenes and dialogue. It’s almost a comedy the way Seagal goes around dispatching the goons and the dialogue is so ludicrous it defies belief. I just don’t know how it gets any better. To me it carries over the spirit of the 80s, something which would die a few years later. The pool hall scene is a masterclass of the action genre, not to mention when he blows the guys leg off. Marked For Death and Above the Law come close, but Out For Justice is Seagal at his best. The freeze frame with his name on the credits after dispatching the pimp is the epoch of the action genre.

Roger: Yeah not sure what's up with the beret, we agree he should be in Cocaine Wars or McBain.

Force Field: We couldn't agree more with your take. We Loved this as teenagers also. It is really is part of our lives at this point.