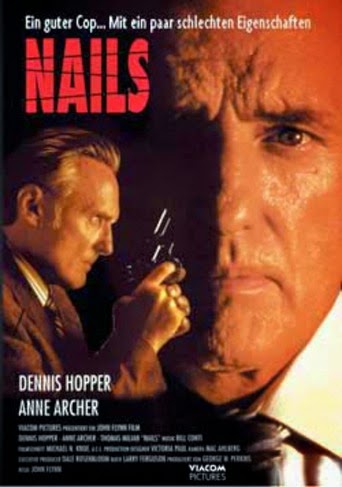 
Harry “Nails” Niles (Hopper) is an LAPD homicide cop - and perhaps the ultimate Cop On the Edge! While his clueless co-workers call him a “dinosaur”, Nails’ old-school ways get results, and you don’t want to get on his bad side. But that’s just what happens when a gang of Cuban drug dealers kills Nails’ beloved Black Partner, Willis (Billings). Nails goes after them with a vengeance, turning L.A. upside down in the process. Not just to avenge Willis, but to settle some of his unfinished business as well. Willis, before his untimely death, was “working on something big” - and it just may be a criminal conspiracy that goes all the way to the top!

Now back with his old partner, Herrera (Milian), Nails, in his own inimitable fashion, tries to find out how Congressman Stambusky (De Young) and his cohort Noah Owens (David) are involved. And all this while he tries to reconnect with old flame Mary (Archer). Will the bad guys get NAILED once and for all?

Nails is a killer Cop On The Edge movie, and getting Dennis Hopper to play him was an inspired choice. This movie truly is Hopper at his absolute best - his energy, charisma and likability carry the film. He’s angry and drinking from the get-go, just as it should be. Just why this L.A. cop has a Southern accent is never explained (or ever mentioned) but it’s all part of the fun.

But it’s not all violence and darkness, there’s some nice humor as well and Hopper gives the Nails character charm, in his own unique way. It’s almost weird James Ellroy wasn’t involved with this project, it’s almost like Dark Blue (2002) or Street Kings (2008) in its approach, before those movies came on the scene. 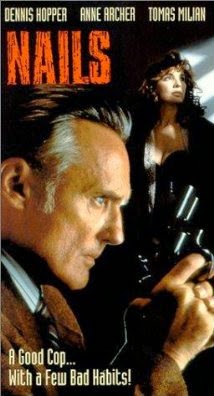 You really have to enjoy cop drama/thrillers (and preferably have seen a lot of them) to properly appreciate Nails. It has just about every cliche you can name - and as we always say, that’s not a bad thing and we need these cliches for our entertainment purposes.

The Black partner who’s close to retirement, the drug deal gone wrong, the abandoned warehouse, the WYC (White Yelling Chief), the WYC who demands our rogue cop hand in his badge and gun, the echoey guitar riffs on the soundtrack during chases/tense scenes, and of course the Cop On The Edge itself, and so much more. Those of you out there that enjoy these things, like we do, will have a feast here.

The movie gets further bonus points for being about dyspeptic middle-aged people, not stupid, flashy kids, there’s a lot of un-PC dialogue, there’s no stupid little kid to ruin things, and, the original foodie, Herrera is always seen eating. Usually a burrito. If you don’t like it, take it up with Harry Niles. 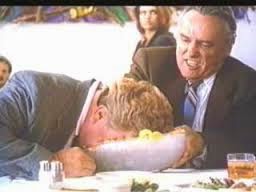 We should take a moment here to recognize the unheralded genius of director John Flynn. It’s an absolute tragedy that he’s not a household name, yet plagiarists like Tarantino are. Besides directing the early Seagal in Out For Justice (1991), he also did Lock Up (1989) with Sly, the underrated James Woods vehicle Best Seller (1987), and the Jan Michael Vincent movie Defiance (1980). But the Coup De Grace is that he directed one of the best movies ever, Rolling Thunder (1977). If he directed nothing else but that in his career, he would be a legend in our eyes. But his career making tough, interesting fare speaks for itself.

Back to the cast, Milian is likable as Herrera, Archer does well in a somewhat thankless role, Keith David fits the bill perfectly as Owens, and Cliff De Young, interestingly enough, plays a guy named Stambusky, which, though different, today has connotations of a certain child molester that are hard to ignore.

Featuring an end credits song by Eddie Money, Nails might be THE classic example of the Cop On The Edge movie. We say see it soon.

Saw it first on VHS and bought it later. But never watched again. One of Hopper's best movie before he only worls for a paycheck in a sort of bad flicks.

Got all the John Flynn movies you named on VHS or as DVD.

Something about another movie. a few minutes agor i read that the Scott Adkins "Greentstreet Hooligans Underground" will be out in the USA in January.

"You've got 24 hours to close this case otherwise it's your ass!"

I'd love to run my team at work like I was a Yelling Police Chief.

Harry: Can't wait to see that Green Street Underground. Looks solid. Happy it's coming out soon. Hopper was awesome in this.

Exploding Helicopter: That would be great! Haha.

Classic movie. Always wanted to review it on my blog, but could never get the screen-shots I wanted. Hopper is a beast in this one. I like the fact that he has a thing for prostitutes (he even has an arrangement with his ex-wife, in which they act out his 'hang-up')
The scene with hopper in the shower (with his dog!?!) is worth the rental alone!
Nice review (as usual)

Totally agree and Hopper is at his best and he's tough as NAILS!