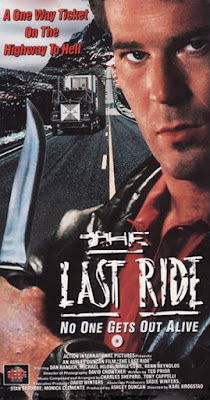 A man named Michael Smith (Ranger) finally gets out of jail after eight years. He seems like a nice enough guy, and he claims he was innocent. After saying a heartfelt goodbye to his long-time cellmate Adams (Jarrett), Smith hits the road to soak up his newfound freedom. Unfortunately, Smith’s life on the outside takes a dark turn when a psychotic trucker named Phil Holtman (Hilow) picks him up while hitching. You’ll understand the reason for the italics momentarily. Meanwhile, our old buddy Phil is off acting crazy and killing people. Local waitress Debbie (Nohavic) is at risk. While initially a suspect, Smith ends up working with the authorities in the area, Sheriff Bolt (Winship) and policeman of the year Bart (Dietrick). Will Michael Smith get out of this jam? Or will this be his LAST RIDE?


The Last Ride is AIP’s take on The Hitcher (1986). The plot, the structure, and even individual scenes are, let’s say, HIGHLY influenced by it. Because it’s all done in that inimitable AIP style, imagine a cross between The Hitcher and Maximum Breakout (1991). If you ever watched The Hitcher and thought its one impediment is that its budget was too high, this is the movie for you.


Dan Ranger has an awesome name. We wish we were Dan Ranger, or even had his name. We would be sitting pretty. The original Dan Ranger, or Daniel P. Ranger as he is credited here, never seems to have capitalized on his fantastic name. He was only in this movie and Cop Out (1991) the same year. What a year that must have been for Mr. Ranger. Of course, during the filming of Cop Out he had to contend with David Buff, who challenged his supremacy in the awesome name sweepstakes. Ranger must have felt humiliated and left the movie industry forever. Ranger looks a lot like Jan-Michael Vincent and he does his best.


The main baddie, Phil, is more annoying than scary. And the doctor who comes to save the day, Dr. Jim Rouchet (Renn Richards, in, amazingly, his only screen role to date) looks like a mustachioed Dick Clark. It appears all his dialogue was post-dubbed, and by a stage-trained master thespian with a lot of gravitas. Speaking of master thespians, that brings us to George Dietrick as Bart, one of the police officers. At one crucial point in the story, he realizes this is his “Streetcar Named Desire” moment and he gives it his all. We commend him for that.


The usual AIP mainstays are here, of course – the movie was written by Ted Prior and co-produced by David A. Prior, and it was shot in and around Fall City, Washington. It retains that regional vibe, and the whole thing is 75 minutes long, not including the world’s slowest end credits crawl. Despite its brief length, it feels longer because this is not one of AIP’s more creative or energetic outings. It feels almost like it’s going through the motions. Sure, there are a handful of standout moments, but that’s all they are – moments. Sadly, director Krogstad and most of the rest of his cast never developed their talents beyond this initial venture. It would have been interesting to see that evolution, but here we just get a taste of what could have been.


In the competitive world of DTV in the early 90’s, you had to be on your game, and it seems The Last Ride just didn’t have what it takes to survive. Thus it became, unfortunately, just more video store shelf-filler. It didn’t have to be that way, but more twists, surprises, verve, or originality might have helped.