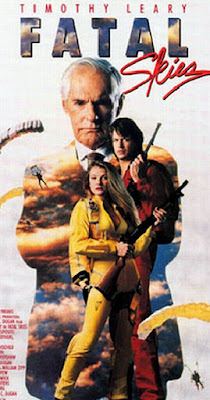 In the small town of Beauville, California, something nefarious is afoot. A no-goodnik named Buddy Boyle (Leary) is dumping hazardous waste into the pristine countryside, and he’s using the local goons to help him out.

When a group of skydiving-mad teens inadvertently stumble onto what Buddy is doing, they at first try the local authorities, but of course they’re on Buddy’s payroll, so, led by girlfriend-boyfriend team Toni and Duane (Carothers and Esposito, respectively), and Toni’s Uncle Jack (Burke), the pilot of their beloved plane, the group attempt to foil Boyle. But it’s not going to be a Freestyle Formation in the sky for this group, especially now that we’re dealing with FATAL SKIES (though to be fair, the skies are perfectly fine. Boyle is polluting the ground. But who’s counting?)

There is an art to casting your movie or TV show. It’s a delicate balance that you don’t want to get wrong, and it can make all the difference in your project. If you cast someone who is inappropriate for the part, it can ruin your movie, but if you cast the perfect person, it can tip the scales in your favor and can propel your movie to new heights of success. The Casting Society of America even has its own awards, honoring the best in the field, called the Artios Awards. Or you could just say, “screw it, we’re getting Timothy Leary”.


The sheer insanity of casting the then-69-year-old Leary as the main baddie in your movie – who did indeed have an acting resume to fall back on, despite the fact that he was mainly known as a Harvard professor and LSD proponent – is, well…pretty insane. But it’s all part of the magic of the video store era that never-to-be-replicated casts can be assembled.

Not since Art Garfunkel had a Short Fuse or Steve Guttenberg went Airborne have we seen such an inspired casting decision. Mr. Leary is backed up with some great people as well, so he doesn’t steal the show – Tim Burke as Uncle Jack is likable and comes off as a cross between James Doohan and Mike Ditka. Geoff Meed is a classic meathead, Melissa Moore has a very small part as one of the teens, Maureen Shannon is downright weird as Willy, and one Vernon Buckwald as the Don Knotts-like Sheriff Horne leaves a pretty strong impression. He even reappears after the end credits.


But the main star of the show is, let’s face it, Veronica Carothers as Toni. She started off her career as the production secretary on Deadly Prey (1987) and parlayed that into a pretty successful career as a so-called “scream queen”. She can be seen in Mankillers (1987) and She-Wolves of the Wasteland (1988) as well. Her beauty is downright mesmerizing and the movie can be enjoyed just for her presence in it. She even pioneers a new slang word – not since Conflict of Interest (1993) and “Jerk Beef” and Bulletproof (1988) with “Butthorn” have we seen such creative use of language. At one point she calls Duane, and we quote, a “Dweezel”. Not to be confused with the fine musician Dweezil Zappa, we assume. That was what was so great about the 80’s and early 90’s and DTV – there were no rules and lots of creativity, even when it came to the words people said and/or invented. You don’t get that today.


There is a lot of bizarre and silly dialogue like that. At times, it almost seems like the script was written in a foreign language and then translated by a computer, then presented to the actors. Even still, it seems like Steven Seagal – or, at least, On Deadly Ground-era Steven Seagal – would appreciate its environmentally-minded message. Maybe because it’s the only directing or writing credit for one Thomas E. Dugan to date, but it’s hard to tell the tone of this movie. One minute it seems like it’s tongue in cheek, or possibly trying to be funny, but then the next minute it’s serious-minded. There’s no consistency there.

Sure, it’s pretty dumb and all over the place, but there’s one thing you can certainly say about Fatal Skies: it’s unique. So let’s stay on the bright side and look at it that way.