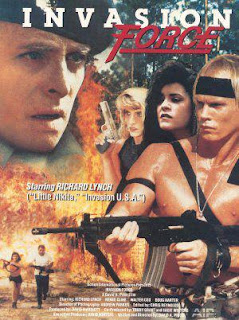 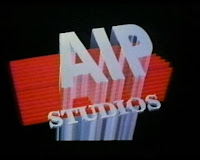 A film crew – an AIP film crew, no less – is shooting their latest action movie in the woods around Mobile, Alabama. Sure, there are some of the typical squabbles that go on, but jokes are being told and pranks are being played in the crew’s off hours, so all seems to be going as normal. That is until a paramilitary organization led by Michael Cooper (Lynch) parachutes into the area with his goons. This INVASION FORCE plans to take over a city (presumably Mobile) as part of their dastardly plans.

They take the director, Ben Adams (Cox) hostage and begin shooting people with machine guns. The film crew only has their prop guns, explosions, and tanks to fend them off, so they’re going to have to use their wits to foil the plans of the baddies. Thankfully, Joni Marshall (Cline), the lead actress, and Douglas Harter (presumably playing himself), the weapons expert, have some tricks up their sleeves. In this battle of film crew versus the bad guys, who will come out victorious? And will there be a final twist to this AIP movie-within-an-AIP movie?


A lone, shirtless meathead stalks the forest. He begins shooting two machine guns at the same time and blowing up various huts. It’s a promising start. Soon enough, the director calls cut and lead star Troy (Fralick) whines that the aforementioned Joni stepped on his foot. What AIP mastermind and writer/director David A. Prior seems to be implying is that these action stars might not be so tough after all.

Prior goes on to postulate what might happen if one of his small film crews, who normally are so expert in rigging up explosions and providing actors with ammunition, came up against the real thing in real life. How would they handle it? Interestingly, this same ground was covered in Contra Conspiracy (1990) that same year. It would be an interesting double feature of low-budget meta mayhem.


While certainly not a behind-the-scenes documentary of AIP, Invasion Force might be as close as you’ll get. The movie takes the time to show everyone in the crew, from the chef on down, interacting with each other. AIP mainstays like Doug Harter and Sean Holton (as Joey) are engaging and very likable. The director, Ben, bears a strong resemblance to – and should have been played by – Brian Benben. Coincidence?

There’s a crew member who looks exactly like Andy Richter who has to help fight the baddies as well. Lower-tier fan favorite and Frank Zagarino competitor David “Shark” Fralick has some fantastic outfits and is well-cast as the musclebound hero. While most of the men in the movie have mullets, we think the bandanna he wears is to cover up his thinning hair on the front of his head. But it’s just a theory. Of course, Richard Lynch is the “Lynch-pin” that holds it all together. (Heh heh). But it’s true.


Could Invasion Force be one big ego trip for Prior and his band of AIP stalwarts? The idea that they could fight against a paramilitary group with real guns and ammo in real firefights? Maybe, maybe not, but it's a good idea for an 83-minute direct-to-video action movie.


Even still, Prior and the gang managed to fashion something modest, yet entertaining, on a rock-bottom budget, which is impressive. Imagine Red Dawn (1984) meets Invasion USA (1985) meets Mankillers (1987). And they even thank the Piggly Wiggly, among other chain stores like Krispy Kreme and Home Depot, in the closing credits. It's blue-collar, homespun filmmaking all the way and therein lies the charm.

Not an alien symbiote with a ridiculous evil tongue said...

I AGREE with absolutely every review!