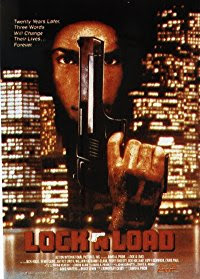 Paul McMillan (Vogel) is a Vietnam veteran living in Colorado. After having some very strange nightmares, he begins to notice that the members of Delta Company – his outfit in ‘Nam – all begin committing suicide. First they go on some sort of crime spree, and then they off themselves. Because this is happening so systematically, McMillan deduces that something nefarious is going on behind the scenes and he begins his investigation into the bizarre happenings.

Teaming up with the wife of one of his former compatriots, Claire Hamilton (Cline), and Detective Bach (Hathaway-Clark), McMillan demands answers. But it’s not going to be easy to unravel the mystery. What is “King’s Pawn”? And what is the secret behind the phrase “Lock and Load”?

Lock ‘n’ Load is one of the more somber and subdued AIP movies out there. If you liked AIP’s Night Wars (1988), surely you will like this one as well, as it deals with similar subject matter. The whole outing has a certain rough-hewn charm and the emphasis here seems to be on drama and intrigue, rather than shooting, blow-ups, and silliness. Sure, some of that is here, and there is a classic drug deal gone wrong, but it’s all pretty serious-minded. Thankfully, it’s done well and makes for a nice change of pace.

Speaking of pace, it is a little slow, but there’s nothing wrong with that per se. Vogel/McMillan really, genuinely seems to care about what’s going on. McMillan is a good hero – he’s cool, but he’s not an outrageous caricature. Vogel had been in other AIP movies such as Hell On The Battleground (1988) and Order of the Eagle (1989), and even served in a behind the scenes capacity on Maximum Breakout (1991). But this is truly his “Breakout” role.

As for his co-star Renee Cline, she was no stranger to AIP and David Prior productions – she was in Future Zone, Invasion Force, The Final Sanction, and Lock ‘n’ Load all in the same year – 1990. Talk about a banner year! Fitting with the overall tone of the movie, her performance is a total 180 from Invasion Force and she goes for a more melancholy and sedate style.


Unfortunately, Lock ‘n’ Load is the only screen credit for one William Hathaway-Clark, who played the mustachioed Detective Bach. We liked him and we thought he added to the movie. Also, if you look carefully at McMillan’s legal pad where he has his list of Delta Company veterans who are behaving strangely, you see the name David Prior. If you blink, you’ll miss it, but it was a nice in-joke.


Lock ‘n’ Load doesn’t seem to be one of the more well-known AIP movies, but if you like that classic AIP style, give it a chance. It’s a little bit different from the rest (well, with the possible exception of the aforementioned Night Wars) and the muted style may appeal to you.

Comeuppance Review by: Brett and Ty
Posted by Ty at 8.5.18

David A. Prior never made any classics except for the turkey Deadly Prey. This movie was much too slow for me. The movies distributed by AIP were usually better than the ones they made themselves.

Understandable. There were some slow moments. It's way too difficult to beat Deadly Prey