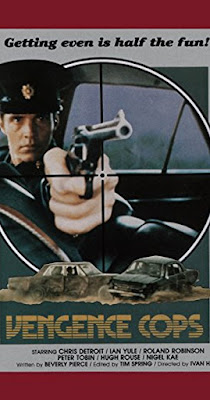 When a nefarious gang of bank robbers led by arch-criminal Boy Jacobi (van der Walt) steps over the line and begins killing the police officers that are trying to stop them, Col. Aucamp (Tobin) unleashes his best men to stop the criminal gang – Captain Nick Jansen (du Toit) and Constable Johnny Peters (Robinson). A game of who can outsmart the other then ensues, but the police may have an advantage in Rene Visser (van Wyk), Jacobi’s girlfriend. Based on some events that happened to her in the past, she begins working with the so-called Flying Squad, AKA the VENGEANCE COPS. Will the good guys get revenge for their fallen brothers? Will they be able to stop Jacobi’s gang before they embark on a diamond heist so they can flee the country? Which side is Rene Visser really on? All those questions and more will be revealed…

Vengeance Cops is a fairly standard cops-and-robbers drama. The filmmakers probably threw all the resources they had available into the production, which were surely limited for South Africa in 1971. The overall tone fits in well with some of the older movies we’ve talked about previously, such as The Opium Connection (1966), or Slaughter Day (1973). The action is somewhat mild – there’s a bunch of car chases (which a movie alternately called Flying Squad couldn’t really avoid having), one of which is at an abandoned drive-in theater. There’s also a car flip, a couple of tame shootouts and some beat-ups. Maybe the idea was to eventually have this be on TV, which would explain the 78-minute running time.

It’s all very “normal” and nothing particularly wacky (or particularly interesting) happens that would make it stand out. For that reason, despite its brief length, it gets dull at times. For example, both the cops and the robbers refer to something called a pantechnicon, which sounds very futuristic and we thought it may be some sort of unique deadly weapon. Upon closer inspection, a pantechnicon is, according to the dictionary, “a large van for transporting furniture”. What a letdown.

It was different that our heroes are uniformed officers the whole time, rather than the normal plainclothes, and the fact that it is South African gives it a unique feel. The Bank Job (2008) even seems influenced by some of the robbery aspects of the plot. The ace up the movie’s sleeve, however, is the music – both the score by Andre Viljoen, which is extremely enjoyable and highly appropriate for the cop dramas of the 70’s – and the incredibly catchy main titles/closing credits song by a group called Sgt. Stephen Pepler’s Squadron. Information on the group is scarce, but Mr. Pepler, if there is such a person, seems to have made himself an official member of the Flying Squad, if for no other reason than his love of the Beatles. His song was released as a single in South Africa in 1971 and it seems almost like children’s music. You won’t be able to get it out of your head for days…or maybe ever!

It appears Vengeance Cops didn’t have that much penetration into the marketplace. There was no VHS release in the U.S. or in many other territories. Consequently, the movie remains rare, but for whatever reason, as of this writing, it’s now available on Amazon Prime. Director Ivan Hall later went on to make Kill Or Be Killed (1976) and Kill And Kill Again (1981), which became much more well-known, at least in America. Maybe some of the reason that Vengeance Cops remained so under the radar is the fact that – as eagle-eyed readers will have spotted by now – they misspelled the all-important word “vengeance” on the poster. If you read or type that word as much as we do, it stands out as a glaring error.

In the end, nothing particularly stands out that would make Vengeance Cops a must-watch, but it’s certainly not bad and there’s a ton of worse stuff out there. Viewers with a particular interest in the roots of action movies in the 70’s in South Africa are probably the target demographic here.