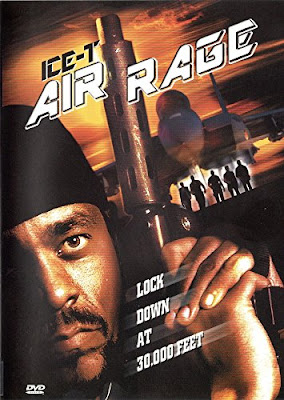 
During a court martial, Col. John Sykes (O’Reilly), and his cohorts as well, are dishonorably discharged. The Chief Judge Adjutant, General Harlan Prescott (Cord), throws out their initial plea agreement, probably so he could bellow at them and then give them the maximum punishment. Later on, Prescott boards a plane with his assistant that looks exactly like Eugene Levy. Sykes and his disgraced army men board the same plane and take it hostage. Now with complete chaos on board, only one man can come in and save the day: Matt Marshall (Ice-T). But because he gets wounded in a firefight, he isn’t as active in day-saving as he should be. That’s when spunky flight attendant Kelly Young (Oja) gets into the act. One minute she’s serving drinks to obnoxious passengers like Morton (Hytner), the next minute she’s killing baddies and flying the plane. Will everyone on board make a safe landing…or will they be overcome with their AIR RAGE?

First came Executive Decision (1996). Then came Strategic Command (1997). Now comes Air Rage, an overlong, unnecessary addition to the plane-hostage movie canon. Over its 100-minute running time, you won’t see anything you haven’t seen before. Another plane is taken hostage, another strike force is brought in to save the day, another terrorist wants yet another CD-ROM filled with information, and it all seems very, very familiar. The only actual air rage is felt by the viewer as he takes in this repetitive muck. 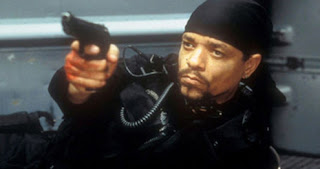 After we were watching the movie for a while, we noticed Ice-T was nowhere in sight, so we went on Ice-T watch. Despite appearing very prominently on the box art, Ice doesn’t show up until exactly 40 minutes in. And even after that, he’s not a forceful hero because he’s injured and in pain for a good amount of time. If there’s a main hero here, it’s Kelly the Stewardess. We were happy to see Oja not be put in an ineffectual stewardess role and instead get in on the action. But she’s not on the box art. Could it be sexism? Maybe because he was fresh off of fellow plane flick Stealth Fighter (1999), where he was the baddie, perhaps Ice-T was sick of planes and he doesn’t care as much this time around. And is it just us, or is it racist that Ice-T of all people leads a Black Ops team where the code name is Blackbird? 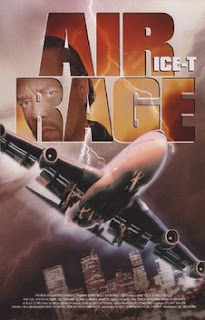 Pretty much the only bright spot in this air disaster of a movie is the presence of Alex Cord as the General. His presence is great and his voice is fantastic. He should have narrated the movie. That might have fixed things. As seems to be standard for Fred Olen Ray, while the movie itself is substandard, he gets a lot of great character actors to shoulder the weight of the project. This seems to mitigate the cruddiness of the proceedings somewhat. Jack McGee, Glynn Turman, and Gil Gerard are all welcome faces and they do their best. Even Steve Hytner, immediately recognizable as Banya from TV’s Seinfeld, is here and he plays an unlikeable jerk very well. But it’s just not enough to overcome the lack of originality here and the boredom that ensues from it.

Pro tip: If you want to watch something like this, but want to see a movie that’s actually good and very entertaining, watch Passenger 57 instead.