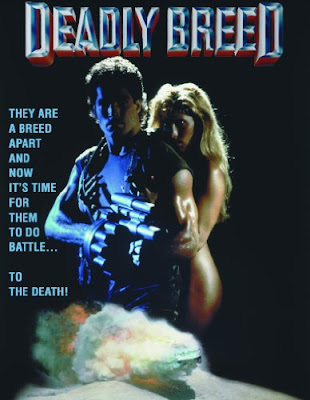 
Jake Walker (Bahner) is a parole officer with a heart of gold. Even though he works with the ex-cons of L.A.’s mean streets, he gives his parolees money out of his own pocket and gets them jobs working on cars with his Uncle Tony (Gallo). (Doesn’t everyone have an Uncle Tony?) He loves his job so much, it’s even causing marital problems between him and his wife Lana (Berger). Jake’s job suddenly becomes even more complicated when Kilpatrick (Randall) enters his life. Kilpatrick is a slightly creepy cop by day, and leader of a KKK-like white supremacist group by night. When Jake starts to notice that his beloved parolees are dropping like flies, he tries to figure out why. He enlists the help of fellow officers Vinnie (Verroca) and Alex (Gray) to get to the bottom of things. But he may have to go all the way to the top instead – perhaps to Captain (Smith) (That’s all he’s credited as). Has the KKK infiltrated the LAPD? And will Jake Walker be able to come face to face with – and put a stop to – this DEADLY BREED?


Deadly Breed is a quality PM outing from the golden year of 1989. Not only does it feature Blake Bahner at his absolute best, it also has Addison Randall at his absolute best. For those two reasons alone it is worth seeing. All the PM mainstays are behind the camera as well, and if you know and love PM movies (as we do) you will be comforted by this and recognize the familiar style. While most of the action is saved for the climax, the performances (especially Bahner and Randall), the interesting idea (psycho cult leader in the LAPD becomes obsessed with a humble parole officer), and the good pace by director Kanganis all add up to solid entertainment.


The great William Smith puts in a sit-down role (technically he stands up once), but it’s an excellent one. He truly was the B-movie Jack Palance and the man has charisma. You’ve got to love his “I gargle with razorblades” voice. We were certainly happy he was here to anchor things. The sidekick, Vinnie, looks like a more weathered Jason Bateman, and Alex, the female officer tasked with getting closer to Kilpatrick, resembles Karen Sheperd. Rhonda Gray, who played Alex, had a great year in 1989 (didn’t we all?) – that same year she was in the fantastic Shotgun (1989).


You know Kilpatrick is evil because he plays the piano intensely and shirtlessly. When he gives his pep speech to his fellow skinheads, the audience is struck by two things. One, how ahead of its time this movie is, and two, connected to that, how the makers of American History X (1998) MUST have seen this movie and gotten inspiration from it. That always happens – major movies borrow or steal ideas from B-movies, and the lowly B-movies never get the credit or accolades they deserve. Well, hopefully now, because of websites like ours and others, that can be rectified, and video store-era gems like Deadly Breed can finally have their time in the sun.


It’s a joy to watch Blake Bahner as Jake – who really does put in an engaging performance here – transition from the office-bound PO with silly ties to his black-leather-jacketed revenge outfit. His turn as “action parole officer” is a far better role than his prior Brad Spyder movies, though you would never think so because Brad Spyder is such a cool name. Guess you can’t judge an action star by the name…at least not this time, anyway.


In the end, Deadly Breed is a fine example of what PM can do – an enjoyable movie made with a low budget, but with a lot of heart. We recommend it.