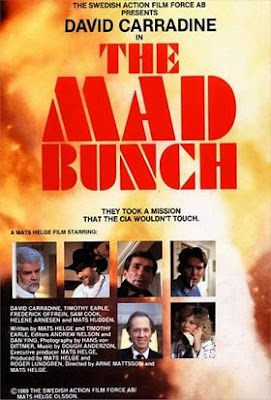 
Professor Foxwood (Carradine) is a man who wears glasses and is a “peace researcher”, whatever that is. This Professional Peacenik gets a dose of the violent world around him when he is kidnapped by some baddies. His wife Melinda (Arnesen) isn’t sure of the best way to rescue her beloved husband, but with both the CIA and KGB involved, things get complicated fast. So she settles on the natural way to solve this problem – she hires THE MAD BUNCH to retrieve him. Who are The Mad Bunch, you ask? They appear to be a non-professional bunch of “heroes for hire” who, instead of playing cards or going bowling together, form an unofficial group of mercenaries. They’re going to have their hands full with this mission, as nothing is what it appears to be, especially with the mysterious Jason Cartland (Offrein) involved. Will they bring Foxwood back alive? Or will something get in their way? Find out today…


Not to be confused with The Wild Pair (1987) or The Bad Pack (1997), The Mad Bunch is another peek into the wacky world of our favorite Swedish writer/director Mats Helge. It all kicks off with a killer opening, as the words SWEDISH ACTION FILM FORCE appear on the screen as our Mad Bunch load their guns and do other things to show they are ready for (Swedish) action! One of the Bunch has a jacket that says Attention This Isn’t The Exercise written from the shoulder to the elbow of said jacket. What can you say, on top of being mad, they’ve got style as well. 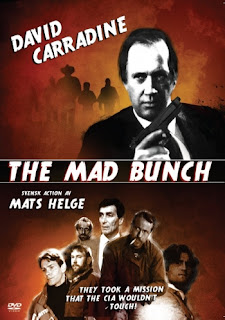 Mats (Carlzen), Moose (Ellgren), Tom (Melin), Billy (Hudden), and, of course, Eddie (Hellquist) are THE MAD BUNCH. It was a pleasure to see A.R. Hellquist again, as we are fans of his Kurt Russell-esque performance in Helge’s Animal Protector (1989). Frederick Offrein, who seems to be in every Helge movie, is here as well. We never fail to mention that he looks exactly like Kenny Rogers. That’s probably because every time we see him, no matter what movie or what role, he looks exactly like Kenny Rogers. He’s a smoother, classier Kenny this time around, which shows his range. To see him is to love him.

As for David Carradine, he’s not really in it that much. Our guess is that he went to Sweden to film Animal Protector in ’89 and stayed on for this glorified cameo because he was already there. It was the golden year of 1989, so why not get the most out of Carradine? In the audio department, we have to say that this movie is really a treat for the ears. Not only do we get catchy tunes by Helge mainstay Dough Anderzon – including some classic 80’s sax – but we also get a mélange of accents by pretty much all the characters. In addition, the sound effects are great. Whoever did them – everything from jumping on the sand of a beach to a neck snap – they were clearly done with gusto. Kudos to whoever masterminded these sounds.

A movie highlight comes when The Mad Bunch are training on a beach, and a young boy who looks to be about eleven years old comes to join the fray. It’s scenes like this that set the movie apart from its competitors (along with every other stylistic choice by Helge). That’s why it’s especially surprising that this movie, along with most of the rest of Helge’s output, never received a VHS release in America back in the video store days. It’s a real shame, as I believe U.S. cult film fans would have eaten it up. Well, at least we can all enjoy his work today, and that’s what really matters.

While it might not exactly scale the majestic heights of The Ninja Mission (1984) or Russian Terminator (1989), The Mad Bunch is pure Helge and is well worth seeking out.