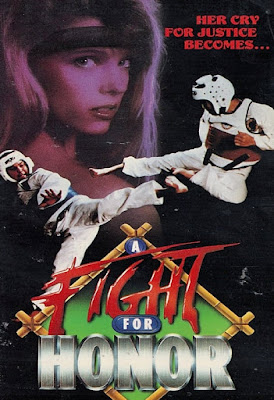 A young Texan girl, who looks to be about high school age, is frustrated by her Tae Kwon Do studies and her three-year record of losing tournaments. Crystal Lundgren (Lundgren) comes from a privileged background and her vapid friends just want to take her mind off fighting tournaments by going out to bars to meet “hunks”. Even her mom tries to encourage her underage partying, but Crystal remains reluctant.

Meanwhile, a hardworking kid named Min-Suk Kim (C.K. Kim, not to be confused with the great Y.K. Kim of Miami Connection fame) is bicycling down the road, delivering pizzas for Double Dave’s Pizzaworks. A distracted Crystal hits him with her car. While Min-Suk is unhurt, the two end up back at the house of Grandfather (Lee). That’s all he’s known as. That’s even how he introduces himself to Crystal. It turns out he is training Min-Suk and his friend David Lee (Stephen Wong) in Tae Kwon Do.

Crystal is attracted to their approach to training, and after the typical initial resistance, he agrees to train her as well. Now with his three students, including the unlikely Crystal, Grandfather imbues them with enough wisdom and fighting ability to enter the All-Texas Tae Kwon Do Championships. Will Crystal get her chance to FIGHT FOR HONOR?

Grandfather’s grasp of the English language is not the best, and he looks like an Asian Tim Conway. You can see why Crystal wants to train with him. Adding to that, her former Sensei resembles Andy Richter and he orders a medium pepperoni pizza for himself during class. He has all the awesome fighting power of Francis Buxton. He’s less Zabka and more zoftig.


Anyway, the problem with these Karate Kid Knockoffs, or KKK’s as we probably shouldn’t call them, is that so much time is spent training, there are minimal goons to fight. And believe you-me, there is a LOT of training in this movie. What fight scenes there are occur when an older set of Karate Goons want to manhandle Crystal. Most of them claim to be her boyfriend, and they believe the surest way to her heart is to hurl a bunch of racial slurs against her Asian friends. After they beat up her friend Dirk (Daron Edwards) (don’t we/shouldn’t we all have a friend named Dirk?), it’s the final straw.


It’s easy to see why everyone loves Crystal, as she’s attractive and has a stylish penchant for extremely high-waisted pants with a half-shirt. At that point it all equals out. We haven’t seen pants this high since Keaton’s Cop (1990). Stacy Lundgren had a lot of the movie on her shoulders and she acquits herself well. It’s too bad she was only in one other thing in her career, the Hasselhoff TV movie Knight Rider 2000 (1991). We would have liked to see what she did with further acting roles. Importantly, her co-stars C.K. Kim, M.G. Lee, and Stephen Wong are all likable.

The movie as a whole does have that regional vibe, and, for a lot of the actors, this was their one and only role. The “local” feel is certainly here, but in a good way. York Home Video released the film in 1992 (though the Tae Kwon Do Delegation was shot in 1990 and it looks like a Republican or Democratic convention, with huge amounts of people holding signs with the states they are from), so they obviously didn’t see a problem with that.

Yes, the pacing is off for most of the movie, and some of the acting and writing are naturally a little clunky, and the wheels really start to fall off towards the end, but the whole outing has a childlike, naïve charm that’s easy to love. There are a lot of nice, little moments (Tae Kwon Do, Texas style, involves cowboy hats and horses. Talk about East Meets West!) and the silliness factor is high. Unfortunately, the movie is rare these days, but if you can find it, do check it out.


NOTE: As of this writing, the movie is on YouTube.

I watched this movie a few months ago. I did enjoy it. Your right about the tae kwon do delegation. The first thought that popped in my head was the political conventions.i also liked the karate kid references when she says wax on wax off. Or maybe I am thinking of another Karate kid knock off. Great review man.

Thanks Joseph! Appreciate the kind words.

There's lots of karate kid knockoffs, but this one stood out.

I am suprised the top of the VHS sleeve does not have LUNDGREN in bold captital letters to get more rentals even if by accident. If Stacy was still in Texas in 1994, she missed out on auditioning for Power Rangers as three of them left the show over their contracts and were replaced by martial artists from a Dallas audtition just in time to co-star in the first movie. Handing over a VHS of her own movie to a casting agent would definately got her noticed by the producers.

Haha good point! It would be just like Death Ring or Money To Burn where it just says "McQueen-Norris-Swayze" She seems like a pink Power Ranger for sure.