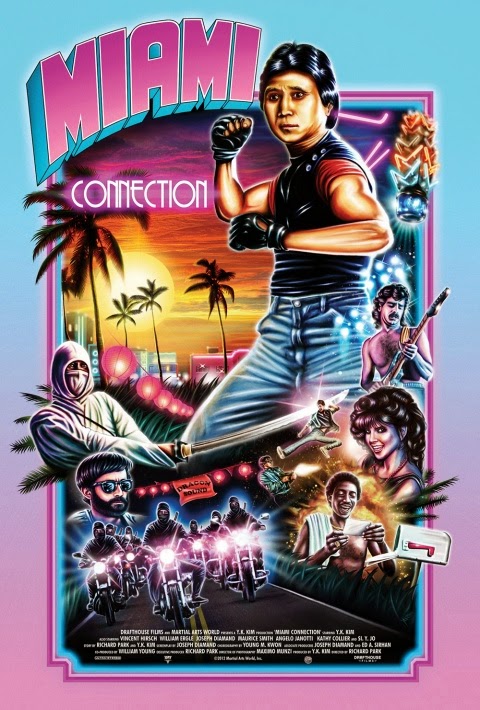 “You will not escape the Miami ninja.” - Yashito


Jeff (William Eagle) and Yashito (Si Y Jo) are cocaine runners who are close to dominating the world with their drug trade. There’s only one thing standing in their way, but it’s of monumentally awesome proportions: a rock band called Dragon Sound, consisting of members of all different ethnicities who all practice Tae Kwon Do and perform in Karate Gi’s (when not sporting their sleeveless band logo shirt).

Jeff’s sister Jane (Kathy Collier) just happens to sing for Dragon Sound, and he severely disapproves of her Pat Benatar-like vocal stylings, so he summons his army of biker ninjas to fight the “friends forever” in mortal combat. So while keyboard player Jim (Smith) sorts out his own personal family issues, it’s up to guitarist (?) Mark (Y.K. Kim in a stunning performance) to take on the baddies, while keeping his band of brothers together. Can he do it? (P.S.: BIKER NINJAS.)

Wildly enjoyable, Miami Connection defines what cinematic fun is all about. Man oh man does this movie deliver the goods you want. National treasure Y.K. Kim’s line readings are worth their weight in gold, so much so that G. Gordon Liddy and William Devane are going to start recommending them as the standard U.S. currency. Sadly, this was his only film, putting him up there in the stars with Matt Hannon, Jay Roberts Jr. and Andy Bauman. His, and everyone else’s acting/fight choreography is mind-boggling, and thank God for the new DVD release, which is loaded up with features, including deleted scenes and an alternate ending, so we can truly experience Miami Connection in all its glory. 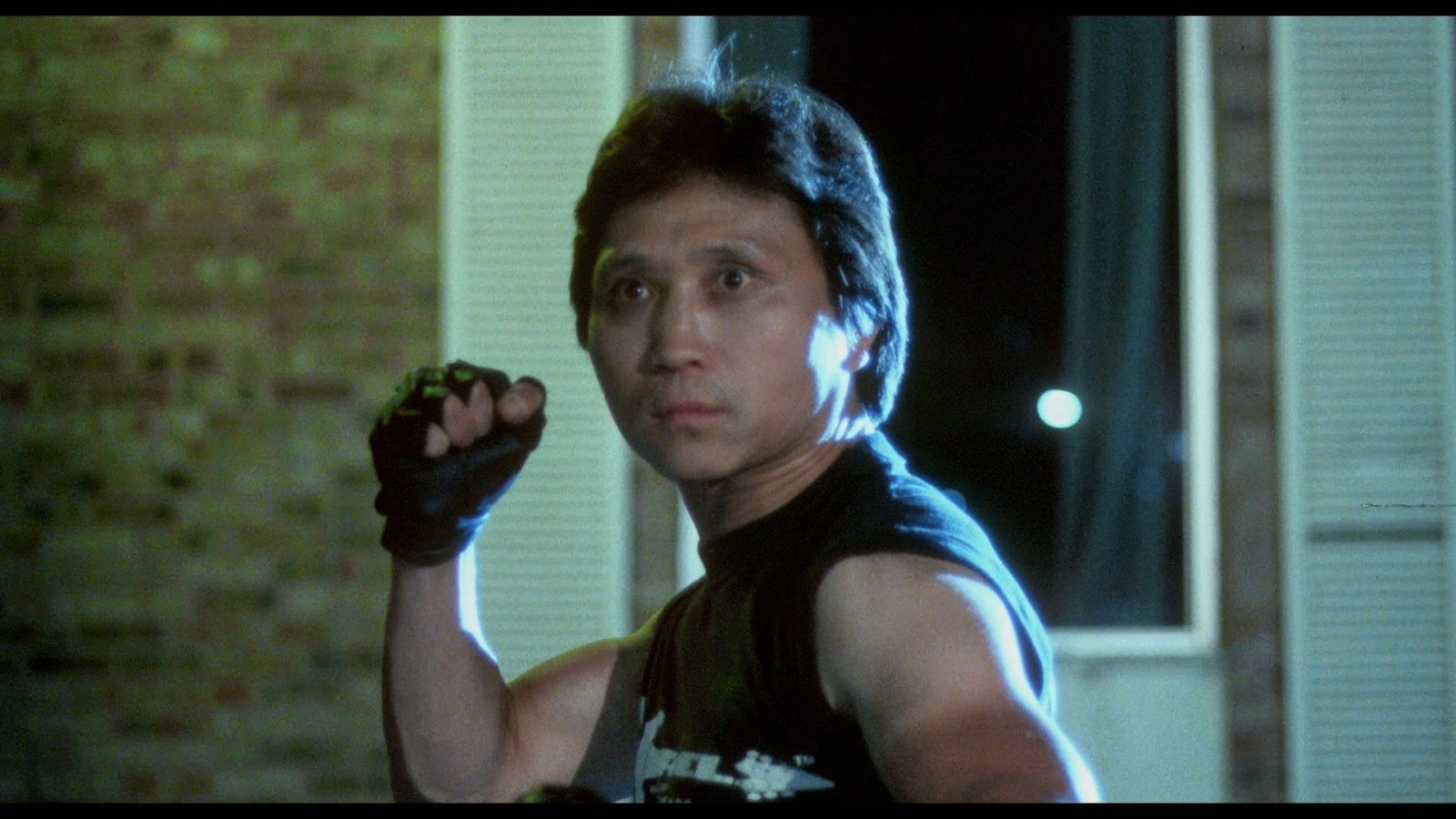 Yet more proof that the 80’s was uber-awesome, in order to properly soak up the copious charm of Miami Connection, you have to mentally transport yourself back to the golden days when guys and girls with feathered hair wore Ratt and Motley Crue T-shirts with blue and/or black 3/4-length sleeves, Pink Floyd painter’s hats existed (and baddies wore them), and Oates rocked out a wailin’ guitar solo while wearing white Karate pants while Y.K. Kim did a Martial Arts demonstration on stage by grabbing a dude’s nose with his toes. It’s not actually possible to get more radical than that.

But yet, there are action scenes with gore and violence, and a baddie saying “No More Mistakes”. This from his hideout which looks like a little slice of Japan in the middle of Florida. Who knew Miami had such a large ninja population? That’s just one of many life lessons you’ll learn from Mr. Kim and the gang. That’s the thing, there’s a positive vibe, emphasizing friendship and camaraderie that you really don’t see in movies anymore. And those classic songs! The songs by Dragon Sound, and the others on the soundtrack are extremely catchy and you can’t help but love what you’re seeing and hearing. A CD soundtrack needs to be released.

It’s funny, it’s winning, there are great classic computers, the guy who plays Jeff looks like Mahmoud Ahmadinejad (if he had been a mid-80’s Florida drug dealer, of course), and there’s even a Godfrey Ho-style Final Field Fight. Truly this is the movie Godfrey Ho always wanted to make, but rarely reached the heights of. Truly YKK isn’t something that’s cryptically imprinted on all of our zippers anymore. He’s a flesh and blood man who has found his way into all of our hearts.

They REALLY don’t make ‘em like this anymore. We would like to personally thank Drafthouse Films for reviving the majesty that is Miami Connection. We look forward to what they’re going to do next. It’s going to be hard to top this. Miami Connection isn’t really the type of movie you see. It’s the type of movie you live. Against the Ninja. We will fight the battle to win.

Also check out write-ups from our buddies, Fist Of B-List, Good Efficient Butchery, and The Video Vacuum!

The lyrics...my god, the lyrics...and the sound...and the hair...and the matching shirts. Finally I know where Bon Jovi stole his best moves from!

You're right. Haha! Jonathan Bon Jovi owes his career to this movie!

This is my all-time Holy Grail must-see movie.

I have heard nothing but incredibly rad things about it.

I have yet to find it, but I shall.

Once you get a copy, you will love it. It rules!