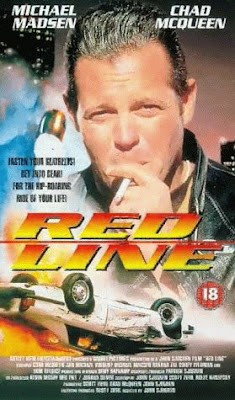 Jimmy (McQueen) is an auto mechanic and part-time stick-up man who uses the cars people drop off to speed away in after he finishes his petty heists. Despite the disapproval of his boss, Jerry (DeLuise), Jimmy ends up working for crime boss Keller (Vincent) as a driver.

While doing this, a series of events occurs: He discovers the truth about Tony (Feldman) and Crystal (Strain) – the brother and wife respectively of rival crime boss Mr. Lawrence (Madsen), and he also gains possession of a special Corvette with a surprise inside. Even though Gene (Z’Dar), one of Keller’s goons, is on his trail, Jimmy manages to go on the run with Gem (Zal), who is escaping the clutches of her abusive boyfriend Dick (Zito). Is any of this making sense? Or, when it comes to seeing this movie, will you be drawing a RED LINE in the sand?


The Lone Tiger effect, as we call it, seems to be something we can never escape. Any time we see a cast list of this many B-Movie faces, it draws us in and proves impossible to resist. Yet again, sadly, we were disappointed. Despite the star power involved, Red Line just isn’t that…well…involving. 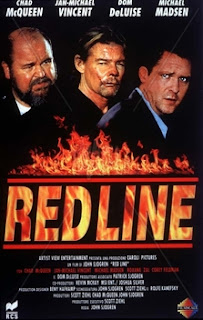 One of the bright spots was the brief appearance of Dom DeLuise, who is just too talented to be hemmed in by a dire production like this. The supposed hero, Jimmy, is an unlikable criminal and he’s the guy we’re supposed to be rooting for? Evidently Chad McQueen thought so, as not only was he the star, he’s also credited with stunt driving, casting, and producing. He was really involved with this project, and while, on the whole, it’s probably a better movie than Money to Burn (1996) - produced by and starring a lot of the same people – it’s not as funny as MTB. But it’s about as dumb, so that equation doesn’t really work out well in the viewer’s favor. Most of Chad’s shirts have sleeves this time around, so it looks like our Chad is finally growing up. 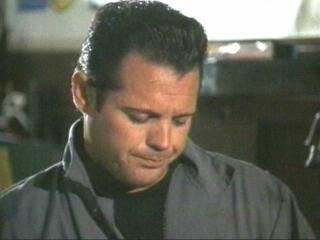 Jan-Michael Vincent’s grotesque appearance – apparently the result of a real-life car accident – only helps his character, but it’s all pretty unpleasant. Chuck Zito’s line readings are pure gold, and the presences of Robert Z’Dar and Julie Strain are always welcome. Even Joe Estevez and none other than Ron Jeremy have cameos. Corey Feldman wears a silly jacket and holds his gun sideways. Roxana Zal plays the inexplicably pretty car wash girl. What drew all these people to be in this substandard movie? Maybe director Sjogren has a lot of charisma. Frankly, we’re surprised Ian Jacklin isn’t involved. 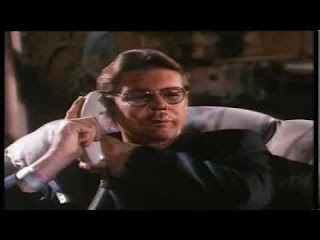 Ron Jeremy plays a gardener whose name is Gardner. So, that’s the level of intelligence on display here…but did you expect anything else going in? We, as viewers, have to wait a whopping 63 minutes until we get to Michael Madsen to be in the mix of this broth. But really, there are no surprises on show with Red Line. It’s a very long 90 minutes. It’s similar to Sjogren’s Strip N’ Run (2000), also starring Madsen.

There should have been scenes of Chad McQueen beating up the many goons the crime bosses send after him, or some such action setpieces. But aside from some driving stuff and a few mild blow-ups, the action factor is low. Just imagine No Man’s Land (1987) but with no Charlie Sheen, nothing really interesting happens, and there are boom mike shadows on the walls. This could have been a really easy fix: make the hero likable and give him goons to fight. Boom. Better movie. But no, sadly, Red Line opts for the stupider road less traveled (that’s less-traveled for a reason).

In the end, despite the stellar cast, Red Line stalls out.

Comeuppance Review by: Ty and Brett
Posted by Ty at 3.8.19