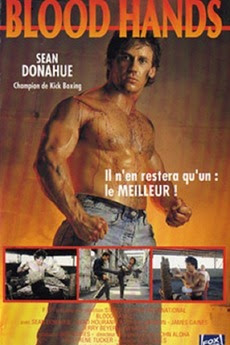 
A gang of aging ne’er-do-wells decide to get drunk and cause a ruckus at the grocery store. In the midst of their raucous tomfoolery, a fight ensues and the owner of the store dies. The guys, who are, apparently, known in the world of kickboxing, then drive over to fellow kickboxer Steve Callahan (Donahue)’s house. The lead baddie, James Clavell (Hourani) – who evidently is not the author of Shogun – begins assaulting Edward Callahan (Nicholson) and his wife while Steve is off training. This event ends in tragedy. When Steve and his girlfriend Tracy (Landson) come home, they see what the gang of MAP’s (Middle-Aged Punks) did and Steve is understandably upset.

Steve’s only clue is a medallion given to kickboxing champs in the area, so he goes it alone on his quest for justice after the main investigator on the case is himself attacked by the MAP’s. Even Steve’s beloved coach, Mr. Gale – who is a dead ringer for Freddy Mercury – isn’t safe from the gang’s rampage. With revenge on his mind and BLOOD on his HANDS, Steve Callahan must snap into action. With his fists and his feet as his only weaponry, will Steve beat the baddies and win the day? Find out today! 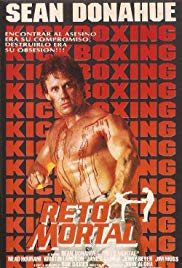 In the U.S., Blood Hands is one of the rarest Teddy Page movies, so we were lucky to see it. It does indeed have that Page-esque silly charm and is certainly entertaining. It’s pretty impressive how they were able to make a 90-minute movie of people punching and kicking each other (that’s what takes up most of the running time). Thankfully, the noises the punch/kick hits make are enjoyable enough in their own right. It’s impossible to describe the sound, but needless to say that in real life a fist or a foot striking another human being doesn’t sound like Mario bumping a box with a question mark on it with his head.

So there’s lots of action, a great training sequence towards the end, and a cast of Philippines-shot movie regulars such as Jim Gaines, Nick Nicholson, and Ned Hourani, who here is inexplicably credited as Nead Hourani. That’s right, NEAD. Could that a typo? In any event, the star of the show is, of course, Sean Donahue, our old buddy from Parole Violators (1994). His classic acting and fighting styles are on display, and you have to love his energy and determination.

Known in Germany as KICKBOX TERMINATOR, which is a fantastic title, Blood Hands is indeed rare but any fans of Teddy Page, Sean Donahue, lots of punching and kicking, and/or silliness are encouraged to check it out.

I completely agree. Not one of Teddy Page’s best, but still pretty good. That just goes to show what an underrated director he was. This and Parole Violators were Donahue’s best.

In your review, you mention the world of kickboxers. So my question is, is it related to the martial-arts world, often referred to in historical Chinese movies? It seems like everyone in China, even women and children, recognised someone who was ”famous in the martial-arts world.” And that was before the Internet!

We agree Teddy Page is very underrated. More people should know about Sean Donahue, those are his best. We've seen Roughcut another Donahue classic and we'll be posting it soon.

Just reading the beginning of this review makes me want to see this. And lo and behold I found it on YouTube. Will be checking it out! Great review!

Thanks! You'll be in for an entertaining good time!