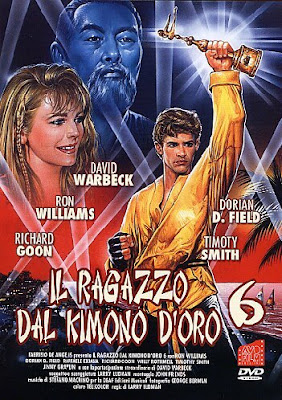 “Here’s your mermaid, you stupid jerks.”


Leo (Daffron) is an overweight college student who runs into a bit of good luck. That’s because as he’s riding his bike while simultaneously having a snack, a limousine carrying some sort of foreign diplomat cuts Leo off and he falls off the bike. While not really injured, Leo overinflates the situation and the diplomat gives him $10,000 in cash right there on the spot. Leo then takes his buddies on a shopping spree, and then on a vacation to Greece. While in Greece, the boys fall victim to a scammer and lose all their money, so they try a gentle scam of their own – they pretend to be tour guides in order to make enough money to get back home.


Unrelated to pretty much all of this, one day Larry Jones (Williams), who is one of the group of friends, sees an attractive Greek girl being assaulted by some toughs, so he intervenes and beats them up. After saving her, she mentions that the yearly motocross race is coming up, and that could get them the money they need to fly back home. So they all go back to her house to fix up an old, shoddy motorcycle. The guy that wins every year is named Mustafa (Exina).

After Larry bests him, he gets mad and challenges him to a Karate match. He wins that every year, too. Larry gets his girlfriend Betty (Field) and the token family friend/Karate Master Mr. Masura (Goon) to come to Greece to train him. Naturally, it all comes to a head at the final fight, which Larry’s father (Warbeck) also attends. Who will be final champion, Larry or Mustafa?

As you may have noticed, there are SIX Karate Warrior movies. This sixth and, to date, final installment in the long-running series was again directed by Fabrizio DeAngelis, using his usual Larry Ludman pseudonym. The above description details the rambling and ramshackle nature of the plot. A bunch of things happen, it all unfolds in due course, but the Karate angle doesn’t show up until later, and is just another “thing that happens”. We’re all surprised when we finally see Larry is even a fighter of some sort. Another element to this is a pleasant, but pointless, Greek travelogue.

There’s a lot of ridiculous and silly dialogue, and speaking of silly, the main nemesis of the movie, Mustafa, doesn’t inspire much fear. He’s thin, waifish, and looks like a more effeminate version of Balki. Karate Warrior 6 came out in 1993, which was the same year as the last season of Perfect Strangers. So it’s safe to say that America was in the grip of Balki Fever at the time. DeAngelis, as was his wont, was just capitalizing on it. Balki was from the island of Mypos, which was Greek (?) so it all makes sense. And he fights a guy named Larry, so we finally get to see what we as viewers have been waiting for for so long: Larry vs. Balki.

Fan favorite David Warbeck is in the movie for probably less than a minute, all told, so any Warbeck fans out there, don’t go into this expecting him to go around busting any heads. What you do get, however, is one of the friends, Greg (Smith), who looks a lot like the elder Pete on The Adventures of Pete and Pete. In the name department, it’s hard to do better than Richard Goon. He plays Masura, and, while training Larry, he calls him, “Larry-san”. Larry does something that looks a lot like Daniel’s crane move from a certain other movie series.

Finally, it should be noted that the scam the boys fall victim to involves a guy who says they can take a picture with a real live mermaid, and then he steals their pants. That’s right, the old mermaid scam. In part, maybe that’s why the Karate Warrior series never made it to any home video format in the U.S. after the first one (which was released by Imperial). Maybe someone, somewhere figured American audiences couldn’t handle the silliness of volumes 2-6.

Anyway, there’s not a lot of substance here – or Karate, for that matter – but the movie isn’t awful. It’s competently made and there are some funny moments. It just rambles and doesn’t have a lot of focus. Are there any Karate Warrior completists out there who have seen all six? If so, write in today.

Comeuppance Review by: Brett and Ty
Posted by Ty at 7.7.19

MonsterHunter has seen and reviewed all six Karate Warrior movies.

Very Cool! We congratulate his effort in watching all 6 Haha. Monster Hunter is a quality website.