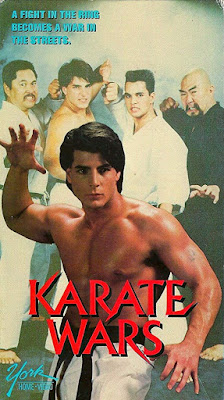 “You do not know nothing about Oyama.” – Jason

Jason (Wolf) is in a Karate class taught by Oyama (Rabago). Even though he is the star pupil, he and Oyama seem to have some conflicts based upon a mutually-shared history. This only upsets Oyama further, as he has constant flashbacks of when he killed an opponent in the ring years ago. Jason and his fellow classmates are training for a big tournament called the Karate Wars, and boy do they train.

Something about all this is even affecting the relationship between Jason and his girlfriend Tracy (Jay). While the owner of the rival dojo and token evil Karate master Nakaso (Okamura) is training his charges equally hard, something happens and the so-called Karate Wars are cancelled. Not caring about the huge cash prize, Jason arranges it so that the two rival schools fight it out with no audience and no awards, just a Bloodfight for honor in their own unsanctioned tournament. Will Jason and Oyama patch up their differences? Who will come out victorious in the new, more underground Karate Wars?

We wanted to like Karate Wars (or Bloodfight 3 if you prefer). We really did. But it kept disappointing us at every turn. The movie is incredibly repetitive, with just about every other scene taking place in a bare-bones room that’s supposed to be the gym at the school (high school? College? Who can say?) where Jason and his compatriots go to train and train and train. Those are interspersed with Oyama’s Black & White flashbacks of his fateful, deadly bout. Over and over and over again. Boredom looms over almost every scene, because there’s really only about three scenes shuffled around for 90 minutes or so.

Barely breaking up the monotony are scenes of ham-fisted drama that aren’t really based on anything. Those scenes are in conflict with the overall goofy tone of the film (which includes some of our dreaded bathroom humor). It has a ground-zero low-budget look to it and the sound quality is muddy at best. Unfortunately, there’s more…

Jason, the hero (?) of the piece – who looks like an attempted hybrid of Tom Cruise, Judd Nelson, and Charlie Sheen – is unlikable. His shining moment is when he throws a hissyfit in the locker room. He’s involved with not one, but TWO fights in the same parking lot in the span of about ten minutes. One is with Oyama, who he’s constantly whining to. Both fights are very, very dumb. Why not change the location just to spice things up? But no, both are in a dull, drab parking lot.

Even Gerald Okamura and the great noises he makes can’t save this wreck. It’s just that nothing interesting ever happens. Director David Huey has directed some action heavyweights in his time, including Gary Daniels, Richard Norton, and Olivier Gruner, so he should really know better. For this particular outing, he goes by the nom d’crud David Hue. Why? Was he hiding, or was he trying to sound more Asian?

Anyway, we hate to say this, but Karate Wars is rare for a reason. Whatever you do, do NOT spend 88 Euro for this on Amazon.fr. Sadly, they can’t all be winners, and this falls into the loser category.

The only memorable thing about this movie was how boring it was. Huey / Hue does have an Asian background, and is a Muay Thai instructor. His budgets never improved, neither did his directing skills.

Funny comment and very true, Huey never got any better unfortunately. You are right the movie is very boring.