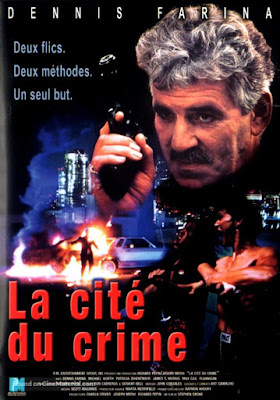 
Brian (Farina) is an L.A. cop and Tony (Worth) is his new rookie partner. Tony takes a lot of good-natured ribbing by his buddies on the force, especially Flannigan (Gail) and Happy (Banks) due to the fact that he disdains the use of guns and prefers Martial Arts. That, and the fact that he’s a teetotaler who doesn’t constantly slam brewski’s at the local bar. To add insult to injury, he also loves healthy food.

Almost by chance, Tony and the local “homies” turn an abandoned boxing gym into a community center by staging bouts for everyone to come and see. Little by little, the place gets fixed up and the homies get a true home. Meanwhile, Tony and Brian’s daughter Susan (Zehentmayr) strike up a romantic relationship. Susan just happens to be blind, but that doesn’t get in the way of their love.

The crime boss of the area, Gerardo (Morris, a dead ringer for Ernie Hudson, not the Rico Suave guy) doesn’t like that people are now helping in the community instead of buying his drugs, so naturally his solution is to kidnap Susan and challenge Tony to the big final fight, settling a score from years earlier. Will Tony clean up the streets…and the STREET CRIMES?

PM delivers the quality yet again with Street Crimes, a completely enjoyable outing that really delivers the goods. Dennis Farina is perfectly cast as Brian, and he’s as charming as all get-out, whether he’s happily chowing down on a burrito with uncommon gusto, busting the baddies, or cheering on his friend and partner in the kickboxing ring. You really care about him and his daughter, and by extension, his partners, especially Tony. 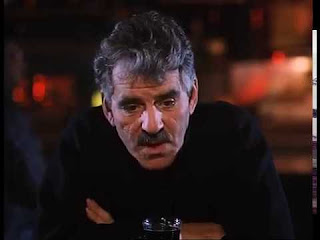 Tony is the kind of young man who takes milk cartons out on patrol and still shouts HI-YA! while he’s fighting the baddies. You have to appreciate his youthful enthusiasm. Like any of us, he goes to buy a new car at night right before the dealership closes, and gets involved in thwarting a holdup of said car dealership. He also wears what appear to be acid-washed sweatpants. While on duty. We didn’t realize you could acid-wash cotton, but, hey, you learn something new every day.

What’s interesting about Street Crimes is that it’s a mix of cop drama, straight-up action, Punchfighting, Martial Arts, and clean-up-the-community movie, with a healthy streak of humor in there to leaven it all out. Max Gail provides a lot of the comic relief, but it’s running through there subtly, as are the more romantic bits between Tony and Susan.

There’s even some social commentary about drugs, child abuse, racism, and community-police relations thrown in for good measure. Somehow, it’s all seamless. It never once feels like a mishmash, despite all the disparate elements. That was super impressive, and easily could have gone south. Thankfully, not only does it all hang together, it ensures the viewer never gets bored. You’re really invested in what’s going on.

Street Crimes is classic 90’s video store action fun. It’s bright, everything works well, and the time flies by. Stephen Smoke only directed two movies in his career, this and Final Impact (1992) – both in the same year!

Looking back, it is hard to beat 1992. All we can say in closing is that, when Tony is walking to the final fight with Gerardo, and all the local homies suddenly join him out of the steam and smoke of the night, and they’re all walking with determination towards their destiny as the John Gonzalez music pumps on the soundtrack, you realize that Street Crimes is nothing less than a triumph.

Great PM movie! Michael Worth shows that he had what it took to become a major action star. Unfortunately, it never happened; and Stephen Smoke became an author.

Thanks for reviewing this movie. Found it on Youtube and really enjoyed it. The fight scenes were great. I like a movie that keeps me on edge. I laughed at that milk carton scene. It was great. Just can't beat 90s action films.

Roger: Definitely agree. Michael Worth was also in fun movie called Fists Of Iron, a quality punchfighter. Didn't know that about Steve Smoke.

Joseph: You're welcome, It was a lot of fun to watch. Agreed! you can't beat the PM 90s action films.