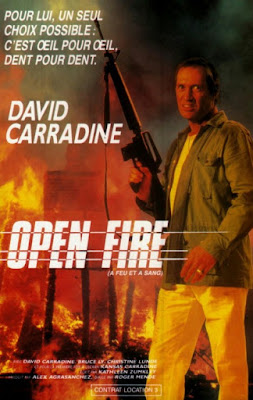 When Wyoming governor Joe Rourke (Carradine) visits the small South American country of Los Flores for some sort of goodwill diplomatic mission, he thinks everything will run smoothly and relations between America and this small, godforsaken country will be better than ever.

To add icing to that particular cake, his wife Gabby (Brooks) is traveling separately by bus to Los Flores with a group of multi-ethnic singing tots called the World Peace Singers. The Rourkes’s plan to meet up and save the world seems assured. But then, of course, tragedy strikes: a band of paramilitary commandos shows up and starts shooting everyone in sight and blowing up every available food and/or fruit cart. They then kidnap the singing children (most of whom we never hear speak, much less sing). (Come to think of it, perhaps we dodged a bullet on that one, unlike Joe Rourke). Yes, you read that parenthetical sentence correctly, Joe Rourke gets shot and is bedridden for a while.

Luckily, an all-female group of fighters known as the Panther Squad steps in and begins fighting the rebel army. Their coach is Master Ly (Ly). That’s right, they have a coach. Mainly because their prior experience consists of standing in the town square and doing synchronized light calisthenics for the bored townspeople. But they look cool in their matching black jumpsuits. After holding off the fighters as long as they can, “Action Governor” Joe Rourke emerges from his recuperation and begins kicking and shooting the baddies. Will Rourke and the Panther Squad save the children and/or Joe’s wife? We know neither he, nor the baddies, are afraid to…OPEN FIRE! 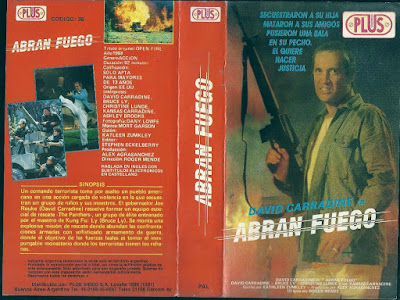 Based on the above description, this movie sounds cool, right? Well, unfortunately, not so much. The elements are all there, but they’re not really capitalized on to their utmost. The problem is that not much actually happens in this movie. Yes, there is a ton of shooting and blow-ups, especially towards the end. The movie doesn’t skimp on the action. But there’s no real plot or emotion to glue it all together. It’s all pretty brainless, and for us to even say that, you can imagine it must be pretty darn brainless.

The main baddie is apparently named Pecos and he looks a lot like Miles O’Keeffe. He doesn’t say anything and he just strokes his pet falcon, which is supposed to be intimidating (?) – the guy who plays him wasn’t in any other movies. Carradine’s daughter Kansas does a nice job as one of the kidnapped children, and she wears a great shirt of the type kids would wear in 1989. She’s in danger of being upstaged by the little black kid who wears a full three-piece suit even though he looks to be about three years old and he’s in a sweltering South American country. He looks very confused. Fan favorite Bruce Ly makes a brief appearance, and during a lot of it he’s toting a machine gun. While interesting as a novelty, I think I speak on behalf of all the Ly fans out there when I say we’d rather see him doing Martial Arts. Just another misstep of this blip of a movie.

Because of its “in one eye and out the other” forgettableness, perhaps that’s why it never secured a VHS release in America. And that’s saying something, because 1989 was a high-water mark year for VHS here in the USA, a time when there were many video stores and they were all clamoring for content. Just why Open Fire wasn’t deemed good enough – despite its reasonable competence and presence of not one but two Carradines, Bruce Ly, and Hugo Stiglitz, and its exploitable subject matter (mainly the Panther Squad, although there’s no nudity) – remains an open question.

Lest we forget one of the main things that makes Open Fire watchable – the funny dubbing. Many characters “talk” without moving their mouths, or voices are heard from offscreen and you don’t know who is supposed to be talking, or the voices don’t match who we’ve heard speaking previously.

There’s also a first for us (at least so far as we can remember) – REPEATED overdubbing. You’ve heard us talk about repeated footage. Now we’ve got repeated talking! Not once, but twice (at least), David Carradine “says” the line “Get out of my way”. Then he proceeds to kick or shoot a baddie. He doesn’t do a ton of punching. He was probably maintaining character because he got shot. Yeah, that’s the ticket. Anyway, it’s the SAME line reading. They just replayed it. Well, why mess with perfection?

In the end, Open Fire (not to be confused with the Jeff Wincott film of the same name of a few years later) is your standard jungle blow-em-up with a handful of unintentionally funny moments. But it’s hard to sustain interest over a 90-minute running time.

I had been looking for this one. Thanks to your post, I found it on YouTube. Hardly ever has a movie with this much gunfire and explosions been so listless. It seems like the filmmakers simply didn’t care. Perhaps they found out they weren’t getting paid? The scene where the Female Fight Squad has to swim through alligator-infested waters while being fired at with both submachine guns and grenade launchers is a real #metoo moment, though. The children’s choir did sing on the bus, by the way: the excruciating 99 Bottles of Beer on the Wall...

Today, I watched two movies featuring an older action hero rescuing a girl in a South American country. In both movies, the hero was injured and spent some time lying down, and both had an action climax in a tunnel complex. Wait a minute! Sly, did you watch it on YouTube, too?

Can't agree more. This is what we call "a movie on a screen". Nothing much of interest happens and then it ends.

Haha I bet Sly watched and studied Open Fire! We loved Rambo: Last Blood by the way. It delivered the goods.

Personally I enjoyed this film quite a bit, it's better then some of the crap that did actually get released over here like Blood Red.

Definitely a funny movie to watch with friends and better than Blood Red for sure.