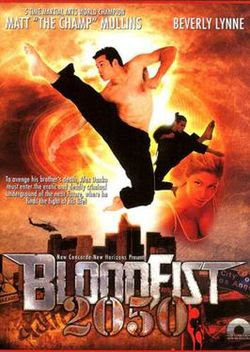 
Okay, okay, we won’t be as lazy as Roger Corman and we’ll do our job. Sometime in 2050, Los Angeles is still a hellhole. (It was a hellhole in 2032 in Dragon Fire). Alex Danko (Mullins) travels to L.A. to get to the truth about his murdered brother. In order to get closer to the underground Punchfighting circuit where his brother fought, he gets a trainer and begins fighting in “The Pit” himself. After many bouts, which honestly don’t have much to do with his slain brother, he finally figures out the nefarious plan. But will it be too late?

Despite what you might, understandably, be thinking, this is not the 2,050th sequel to Bloodfist. It’s only the ninth installment in the series. Noticeably, the great Don “The Dragon” Wilson is nowhere in sight. Perhaps he cottoned on to the fact that this is as junky as all get-out and has a downmarket and cheap look to it.

It all opens with some stock footage from Dune Warriors (1990) and there is some attempt at marrying this with the 2005-shot footage. Some of it looks sped-up, as do some of the fight scenes. It’s also highly likely that there are repeated and/or stock shots of crowds as they cheer on the fighters. Edited in to all of this are the Corman specialty, stripping scenes. Between the stock footage, recycled footage, sped-up footage, and stripping footage – and keep in mind this movie is (mercifully) only about 75 minutes, we as viewers aren’t left with a whole heck of a lot.

Plotwise, Bloodfist 2050 is the same movie as Dragon Fire. It is a lower-rent version of Dragon Fire. Think about that for a second. When you’re a lower-rent version of Dragon Fire, there is a definite problem. Yes, it’s post-apocalyptic for no discernible reason. Yes, it’s a Punchfighter. Yes, all the exact same plot points are covered. But the question is: why? Instead of Dominick LaBanca, now we have Matt Mullins in the lead role. It’s clear he can do Martial Arts – but the attempt to do Hong Kong-style heavily choreographed, heavily stylized, fast fight scenes come off as humorous because they’re unnecessarily acrobatic for the cheapjack overall vibe.

Also, Mullins looks like a skinnier Freddie Prinze, Jr. but with Obama-styled ears. To make matters worse, his buddy in the movie, Randy (Meadows) looks exactly like him. At least the buddy role in Dragon Fire was filled by a dude who looked nothing like the main dude. Here they’re practically twins. Philippines movie mainstay Joe Mari Avellana did his best as the ring announcer and he resembles Johnny Depp here, strangely enough. The elderly assistant from Dragon Fire is nowhere to be seen. Just another example of how Dragon Fire is better (we never thought we would ever say that…) 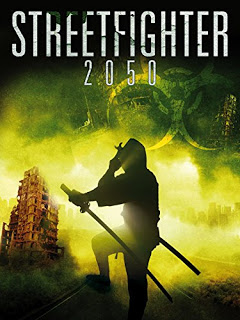 Honestly, this is not Cirio’s finest hour. He let us off the hook somewhat because the movie is so short, but the whole outing is amazingly dumb and unnecessary. Does Corman think so little of us as viewers that he can just regurgitate the same movie again and again, and we’ll just consume this stuff and thank him for it? It would have been nice if we, the loyal viewers of this type of material, were given a little more credit. But, oh well, they can’t all be Stick Fighter (1994), I suppose.

Bloodfist 2050 is a stain on the series as a whole, and only worthy if you are a completist of Punchfighters, a completist of the Bloodfist series, or you want to watch something short that’s so dumb it’s almost funny. Or you want to do an A-B comparison with Dragon Fire. Otherwise, it’s probably best to avoid this one, which shouldn’t be too tough.

I didn’t think it was that bad, because:
a. Most punchfighters are fight-dialogue-fight ad nauseam. This one was fight-striptease-fight, etc. Novel concept! I’ve heard enogh dialogue to last a lifetime.
b. Matt Mullins has the skills to carry it. See more of him in Death Fighter, with Don ’The Dragon’, which makes it sort of a Bloodfist Team-Up.
c. Dragon Fire was worse IMO.
d. I don’t mind recycled plots. Everything is recycled, and I don’t think I’ll ever see anything surprising agan. I’m a cynic, I know... Sorry!
e. Fight-striptease-fight is a darned humorous concept for a movie... Again, sorry!
f. Most Tapout series movies tried to copy the fight-striptease-fight concept, and failed, miserably.
g. If you want to see the Cirio with the most recycled footage, watch Water Wars, which is much worse than this one.

As a side note, I’ve always found it curious that contemporary audiences expect something new and original from their dramatic or musical entertainment. In ancient Greece and Rome, the best version of the expected plot or music was the one that garnered the largest acceptance. Even in Shakespeare’s time, the traditions were the same: in tragedies, most of the cast had to be dead when the play ended (like in most action and horror movies), and in comedies, someone had to get married at the end. Audiences never cared for originality. If contemporary audiences were the same, I suspect cineplexes would be filled with punchfighters and Die Hard In A _____ movies, and radio stations would only play classic rock. Which would be the better world?

Thanks for the warning. Maybe it would be more entertaining if he did a Godfrey Ho and cut and paste Don Wilson in the movie.

Roger: Thanks for your thoughtful and insightful comment. Everything you said is true and well-put. Corman certainly followed this formula to the letter. Someone must be watching...(besides us). Thanks for the warning about Water Wars, we tried to procure Water Wars but its hard to get. Lastly, we have Death Fighter coming up in our pile to watch. Happy to hear its good.