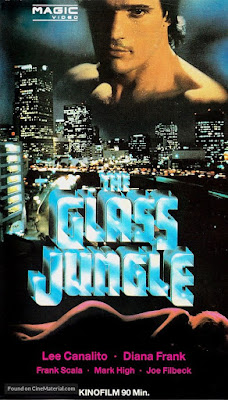 Cutler Irving (Canalito) is a lovable lunkhead who drives a cab by day and practices his boxing moves by night. He’s a simple man who never done nothin’ to nobody. Trouble finds him in the form of Tate (Scala), a mob boss who forces him to drive around L.A. with five million dollars in the trunk of his cab. The exact reasons for this aren’t made entirely clear, but the FBI and LAPD are wise to Tate so they try to use Cutler to bring him down. Meanwhile, Cutler has many flashbacks involving Mary (Frank of Mankillers), a French student who he becomes involved with. Will Cutler Irving’s checkered past catch up with him, or will he be saying fare-thee-well…to his own LIFE?

Perhaps the ultimate “taxicab confession”, The Glass Jungle is another low-budget labor of love from Joseph Merhi and the City Lights crew. Like all the City Lights films, and even the later PM outings, we as viewers can readily see that what these movies lack in finances and technical excellence, they make up for with heart and a scrappy charm. In other words, you can sense that Merhi and the gang were young, hungry, and just wanted to make entertaining movies. They succeeded time and again, and here, in spite of some of its flaws, is no exception. 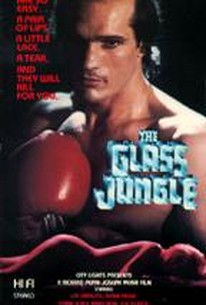 Cutler Irving is a somewhat unorthodox action hero – a mild-mannered cabbie who, yes, is a boxer (as Canalito is in real life), but is soft-spoken (less charitable people may say unintelligible) and more of a lover and not a fighter. However, that all changes during the final face-off with Tate. Irving finally gets to show that he’s a master of weaponry after all.

The location of the confrontation appears to be the same place where Jeff Bridges and Andy Garcia battled in 8 Million Ways To Die (1986). Of course, that movie didn’t have Frank Scala as Tate, a man who seemingly has modeled his life after the style of Kenny G. And that includes how to be a scary and intimidating mob boss. That being said, The Glass Jungle is filled with fun characters, which is one of the movie’s strengths.

As Cutler drives around, we get to see a lot of L.A. landmarks preserved in time, which, for us at least, was enjoyable as a time capsule. Some movie marquees are seen, so we know it must have been shot during 1987-1988, as Robocop (1987) is showing, among others. The theme song, “Warrior In A Glass Jungle”, by Lee Witherspoon and John Gonzales, blasts on the soundtrack and is a classic 80’s fist-pumper. Just why we’re supposed to be pumping our fist isn’t exactly known. Maybe because Canalito was a boxer and Rocky movies always had songs like this.

The Glass Jungle is a small, modest movie and a good example of the independent filmmaking of the time. Just because it wasn’t recognized or appreciated by the hoity-toity film festival circuit (i.e. Sundance and the like) doesn’t mean it isn’t a worthy and respectable addition to the independent-film canon. While it may not be as professional a product as our eyes are used to seeing today, we say check out The Glass Jungle for a glimpse of humble – and truly indie – filmmaking in late-80’s L.A.

Fun movie if you want to see what the streets looked like in 1988. The protagonist spends so much of the runtime driving that the movie actually turns more into a road movie than an action movie. The magically appearing crossbow at the end predates the gun taped to the back of Bruce Willis in Die Hard. I guess great minds think alike.

Glad you are still finding obscure City Lights films. A minor quibble with your review, however: "Robocop" was a 1987 movie, not a 1988 movie.

Roger: Totally agree! Lee drives so much. Haha absolutely about the crossbow.

Keith: Thanks! This was a obscure but fun movie. Also we fixed the Robocop year. :-)