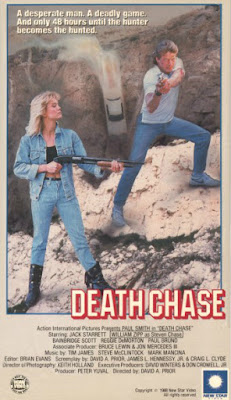 
Steven Chase (Of course his name is Steven Chase) (Zipp) is just a mild-mannered resident of Riverside, California who is out for a bike ride with his sister. Seemingly at random, violence erupts and there are car crashes and shootings. One of the mysterious men who gets shot hands Steven Chase a gun and says to him, “you’re it”. Now a pawn in a deadly “game”, Steven Chase goes on the run, having to shoot and/or beat up all the goons that are suddenly after him. Thankfully, he has the help of Diana (Scott) and his buddy Eddie (De Morton). Lt. MacGrew (Starrett) of the LAPD is also on the case. On top of all that, a large man named Steele (Smith) seems to appear wherever the “Death Chase” is going on. Will Steven Chase survive this…Deathsport? Sorry, DEATH CHASE? Find out today!

Before Deathfight (1990), before Fugitive X: Innocent Target (1996), before The Game (1997), and certainly before The Tournament (2009), Death Chase was first in the “innocent guy caught up in a game where people try to kill him” sweepstakes. Leave it up to David A. Prior and AIP – sure, they might have small budgets, but they have big ideas. Entertaining ideas that were used later in other forms. Will Prior and the gang ever get the proper credit? Probably not…except on sites like ours.


If you’re familiar at all with AIP, Death Chase delivers a look and style that you may be used to. Having seen most of AIP’s output at this point, we found it comforting. Low-budget stunts, shootings, and chases (of course) are the order of the day. Chase is chased by car, by motorbike, by boat, on foot…pretty much any way a human being can be chased. One thing you can’t deny – the movie lives up to its title. 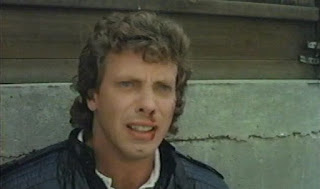 AIP stalwart William Zipp is well-cast as Mr. Chase, our hero. Fan favorite Paul L. Smith brings more life to the proceedings as Steele, and veteran actor/director Starrett is interestingly cast as MacGrew. While Reggie De Morton should have been given more to do, actually the movie felt overlong at 93 minutes. This basic idea could have gotten its point across at maybe 80-85 minutes.

Yes, there is a lot of mindless shooting, and pure silliness with a lot of people talking in funny voices that are post-dubbed in an amusing manner. But that being said, the idea of the corporate overlords in a smoky back room playing a real-life version of Risk with actual people’s lives is a good and interesting idea. The makers of the aforementioned The Tournament must have thought so. Also, the two female assassins playing “the game” was an idea we enjoyed. The idea of a bunch of people tasked with killing Steven Chase and he doesn’t know who to trust or where to turn put us in mind of John Wick: Chapter 2 (2017). Could it be that the makers of the John Wick franchise have seen Death Chase? We may never know…

Once again, some ace Steve McClintock music is on the soundtrack. Songs like “Running With The One I Love”, “What’s Goin’ On”, and “Can’t Get Enough” are movie highlights. McClintock always delivers the goods.

So, for an adventurous AIP outing that probably won’t change your life but fits squarely in the AIP canon (and was quite ahead of its time), do check out Death Chase.

Also check out a review from our buddy Keith From The Unknown Movies!

McClintock’s songs is the high point of most AIP movies. Many of his soundtracks are available for streaming, at least on Tidal, including Death Chase.

Can't agree more about Steve's songs. That's cool they are available to buy now. Not just on YouTube