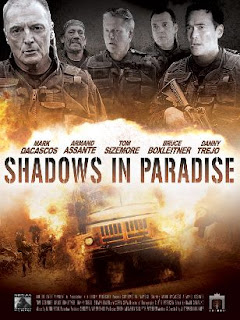 Max Forrester (Dacascos) is fighting in Iraq alongside Sasha Villanoff (Skya). As a fellow soldier and Max’s girlfriend, he feels especially inclined to protect her from the baddies all around her. Max is put to the test when Sasha disappears. He tracks her to a place called Paradise Island, found somewhere in the middle east.

During the course of their perilous journey, they uncover an illegal arms-smuggling ring run by some corrupt soldiers called Shadow Company. Since Shadow Company is on PARADISE Island, that explains the title of the movie. Meanwhile, Col. Bunker (Sizemore) and Captain Dyer (Boxleitner) are at odds because of the activities of Captain John Santos, who goes by the code name of “Ghost” (Assante).

Could he have something to do with the arms smuggling? Or could it be Matador (Trejo), Stronach (Divoff), General Ruth (Wells), or Agent Stubbs (Bauer)? While we desperately want to invest some intrigue into all of this, we really just wanted to highlight all the names involved here. Will the hot middle eastern sun eradicate all the SHADOWS IN PARADISE? And who else will be eradicated? 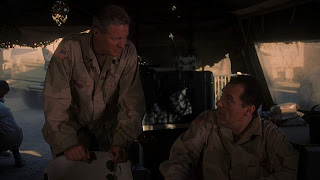 Shadows In Paradise is such a textbook example of what we call the Lone Tiger Effect (for those who don’t know, it’s when a movie features a bunch of the B-Movie names we all know and love – so we think the movie itself is going to be good – but it turns out to not be so hot) that we should really consider changing it to the Shadows In Paradise Effect. Yes, all our favorite people are present and accounted for but…at what cost? In other words, while it was enjoyable to see all our cinematic buddies all together in one film, we were disappointed at the final result. Which makes things all the more disappointing.


That being said, this movie is just too darn silly to really hate. While the overall feel is one of those modern-day DTV “Seal Team” movies (i.e. junky and none too involving), and the muzzle flashes on the guns are roughly on par with the ones in Hangfire (1991) (i.e. really stupid and fake looking), once you see Tom Sizemore’s “acting”, you want to say to the movie, in a loving and forgiving tone, “I can’t stay mad at you…”


Is it any wonder, then, that with the incoherent mumblings of Armand Assante, layered with the incoherent ramblings of Tom Sizemore, that the movie as a whole is, well…incoherent? Thankfully, Sofya Skya is on board, but Assassins Run (2013) offers up a better example of what she can do. She does sing the theme song, “Don’t Break My Heart”, but with its 90’s Lilith Fair vibe, even that indicates she is capable of better. She should have followed the example of Natalie Burn and done more of a rocker.

There’s a bunch of beat-ups and shooting, and even some light prerequisite torture, but what else would you expect from director Maunder, whose only other directorial credits are Tiger Claws II (1996) and Tiger Claws III (2000)? Trejo, Bauer, Wells, and Divoff – enough to carry a movie in their own right – have glorified cameos. We believe Bruce Boxleitner was here, but it could have been Barry Bostwick. We’re still not sure.

In the end, Shadows In Paradise is a lightweight and unfortunate example of a modern-day DTV actioner. While we were happy to see all the great cast members, to say they weren’t all used to their full potential is an understatement. It’s all pretty disposable. Bring us back to the 80’s any day.

Many of the great cast are in roles that anyone could have played. Average and unmemorable DTV movie typical of the 21st century.

Can't agree more Roger. This was a disappointment, but Tom Sizemore's acting was so lifeless you can't help but laugh.