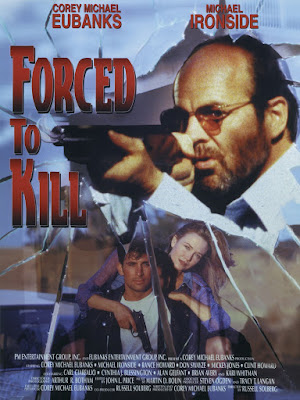 Johnny (Eubanks) is a dedicated repo man who looks a lot like a young Patrick Dempsey. He’s so into his repo’ing, he’s built a whole life for himself and his fiancé, Heather (Whitman) and they’re on the road to marriage. When Johnny’s boss tells him to drive a Jaguar from L.A. to Utah, Johnny hits the road without a care in the world.


Suddenly, he runs afoul of stereotypical rednecks Rance (Howard) and his sons Dwayne (Swayze) and Neil (Jones). This crazed family takes note of Johnny’s fighting skills, so naturally they put him in chains and force him to fight/train in local Punchfighting competitions. Sheriff Wilson (Ironside) is certainly aware of the situation…but what side is he on? All the locals, including higher-ups in the government come to these illegal Punchfighting matches. But when the sinister good-ol’ boys kidnap Heather, Johnny goes out for revenge, and this time he’s not just forced to fight, he just may be…FORCED TO KILL.


We’re all familiar with the classic Coreys of the 80’s. Those being, of course, Haim, Feldman, and Hart. But like one of the lost tribes of Judah, there was another Corey who is only being uncovered today: Corey Michael Eubanks.

Unusually for a PM film, Forced To Kill is just kind of lackluster. The filmmakers probably just assumed that they had an awesome ace in the hole by getting Bob Eubanks’s son to write, executive produce and star in the film. And while Corey Michael Eubanks (henceforth to be referred to as CME) is indeed a gem, this movie has some structural problems that even he can’t overcome. 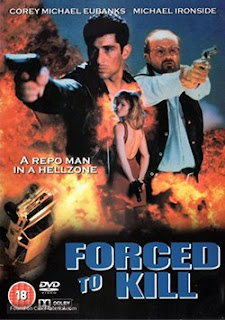 The simple plot is extremely repetitive and there are no real surprises. At about an hour in, we get into boring tournament sequences that just aren’t that interesting to watch. There’s no one, singular, charismatic, evil villain such as a Brakus to provide a foil to CME. On top of that, to have stereotype redneck characters as these baddies are is just played out. Although, to be fair, if you’re going to get some redneck baddies, it was smart to get Don Swayze and Mickey Jones, who specialized in that sort of thing.

In other cast news, we do get two Howards for the price of one – both Rance (playing a guy named…Rance) and Clint Howard are on board. One of the better scenes appears when a bunch of aging punks (not quite in their 40’s as is usually the case but they appear to be getting there fast) begin bullying Drifter (Clint Howard) and CME intervenes and beats up the bullies.

Director Solberg is primarily known as a stuntman but he doesn’t hold it together too well behind the camera. A lot of what we see is stodgy and the pacing is off. We don’t even get as many CME wisecracks as we should. On the bright side, we do get some classic PM car flips and blow-ups, this time done up in a country-fried style rather than of the usual urban variety. While we appreciate the difference, it just wasn’t enough to keep the movie afloat.

In the end, Forced To Kill (not to be confused with Trained To Kill or Forced To Fight) is Punchfighting by numbers. That was disappointing because some of the talent on screen is capable of much better. On the whole, it’s not weird, wild, and wacky enough for our tastes. While the movie isn’t bad, it’s really just okay - we can only wholeheartedly recommend it for Punchfighting completists. Or Don Swayze completists. We know you’re out there.

Also check out write-ups from our buddies, Bulletproof Action and The Unknown Movies!