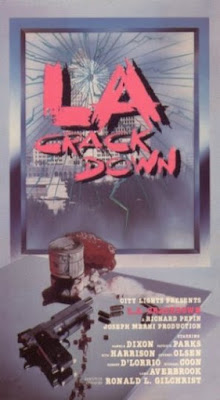 
“I always have salad with chicken.” – Paul


Karen Shore (Dixon) is a policewoman and chief member of something called the Social Youth Organization. Karen is earnest and caring when it comes to the downtrodden girls of L.A. who are mired in drugs, prostitution, pornography, and other forms of sleaze. She’s so nurturing and motherly that she takes Angie (Parks) and Fiona (Kita Harrison), two wastrels caught in the grimy underworld, into her home to try to rehabilitate them.

That puts her at loggerheads with her husband Paul (Olsen), who doesn’t want them there, but ends up getting caught sleeping with Angie (what did Karen think would happen?) – eventually Karen decides to take the law into her own hands and go right to the source of the drug epidemic – the pushers. This despite the admonishments of Wallace (Van Haynes). Will Karen crack up? Or will there be an L.A. CRACKDOWN?

L.A. Crackdown is a prime example of a City Lights production (for those who don’t know, that’s the company that preceded PM Entertainment), and it’s written and directed, as usual for City Lights, by Joseph Merhi, who also gets a killer death scene as a baddie named Speed. Watch out for that. Actress Pamela Dixon never did a movie outside the City Lights/PM universe. Surely that must say something.


A lot of what we said in our review for The Glass Jungle also applies here – it simultaneously works as a time capsule, and as an example of a truly independent low-budget film made by people who just wanted to make entertaining movies. That shows in every scene, and despite some flaws (amateurish technical aspects, stodgy plotting, acting that defies any logical definition), we as viewers do NOT see movies like this being made anymore. Products like this should be, if not cherished, certainly investigated and re-evaluated. If they were ever evaluated in the first place.

What we’ve got here is a social drama with gun-shooting. Like a lot of movies of the time, it seems influenced by Miami Vice (which, let’s not forget, was a phenomena of that time). Interestingly, the movie seems especially informed by the episode called “Little Miss Dangerous”, which first aired in ’86. That episode starred musician/actress Fiona. Could that be a coincidence? Or maybe a subtle tribute?

In any case, like a lot of low-budget independent movies, it starts to flag a little way past the halfway mark. It needed a main, super-evil baddie as a central villain, like a diabolical pimp or something like that. That would have given the movie more of a motor and a motivation for Karen’s actions. On the funny side, the two girls are labeled as “juveniles” but they seem considerably older. Like Beverly Hills 90210 older. Or maybe, as is usually the case, movies like this are just ahead of the curve.

Like most City Lights/PM productions, the music is by John Gonzalez, and it’s excellent and adds a lot. Gonzalez contributes some of his best-ever cues here, with some funk that wouldn’t sound out of place in a Mega Man video game.

L.A. Crackdown - which actually got a sequel that was made the same year and further continues the adventures of Karen – may not be perfect but it’s at least interesting. And that’s more than you can say for a lot of movies, especially ones made with much higher budgets. We can see they were trying and putting forth effort. It’s time the City Lights canon sees wider viewership.

Man I remember renting this at a mom and pop video store back in the early nineties. A year ago I found it online and watched it and really liked it. I never saw the second one but I will read your review first before seeking it out. Thanks for reviewing this one.

No problem, thanks for reading! Tell us what you think of the second one once you watch it.