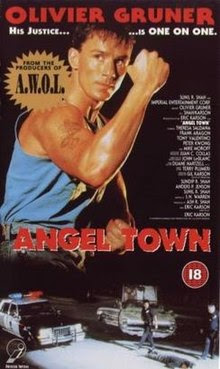 
Jacques Montagne (Gruner) is a Frenchman from Paris who saves up all his money so he can get an engineering degree from "Southern California University". On his first day in the United States, he has trouble getting off-campus housing. Not knowing the difference between where the "nice" areas of L.A. are and where the "ghettos" are, he finds himself in a gang-infested barrio. He ends up renting a room from a nice lady and non-gang member named Maria (Saldana). The local gang wants to recruit her son into the gang so they resort to the usual tactics such as terrorizing the town around them.

Unfortunately for these gang baddies, Montagne had a troubled upbringing in Paris where he was forced to learn to fight. So, teaming up with his buddy Henry (Kwong) and the local wheelchair-bound Vietnam Vet, Montagne takes on the baddies using his considerable Martial Arts abilities. but will he be able to take on the gangs and win?


Angel Town is an amusing beat-em-up that's reminiscent of similar titles such as Street Corner Justice and Enemy Territory. A gang or gang lays siege to a house or houses and the hero has to fend them off or eliminate them altogether. It doesn't rise to the heights of Private Wars or The Annihilators, but there are some entertaining moments. 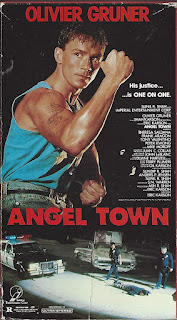 The main problem is that it can't really justify its 102-minute running time. If Angel Town was 80 minutes, we'd be dealing with a classic. The idea of a French guy getting in the middle of a drive-by shooting by Mexican gangs towards college students (this actually happens in the movie) is a novel and almost-brilliant idea. There are some enjoyable brawls that go on, and Olivier Gruner is likable. They actually gave a reason why his accent is so thick, which isn't always the case. It has a good amount of un-PC dialogue, which was more than welcome, and there because the movie has a copyright of 1989 (though it came out in '90) - the golden era before political correctness ruined everything in our society. Perhaps we need Jacques Montagne to clean things up now more than ever.

What's interesting is that, in The Circuit series, Gruner plays the immortal role of Dirk Longstreet. Dirk Longstreet is a college instructor. Could Jacques Montagne be like a forerunner, or precursor, to Dirk Longstreet? Perhaps that's the Longstreet origin story we've all been asking for.

In other casting news, one Tom McGreevey plays Dr. Rice, a very rude and almost Animal House-esque college professor. He steals all his scenes and is a lot of fun to watch. There are also blink-and-you'll-miss-em early appearances by Bruce Locke and Mark Dacascos (credited as "Dacascus").

Director Karson has a history of churning out middling action fare such as The Octagon (1980) and Black Eagle (1988). So, despite its unnecessary length, that officially qualifies Angel Town as his best actioner. In any case, lots of vatos wear button-down plaid shirts with only the top button buttoned, with a hair net and sunglasses. They say "homes" and "ese" more than John Travolta in Chains of Gold. So it's not a total loss.

The songs are provided by Gil Karson (presumably the director's brother?) who also appears onscreen as a member of The Hot Heads Band, who play at the college party that gets driven-by by the baddies (is that how you would say that?) - anyway, the movie was originally released on an Imperial VHS, but now is available on Blu-Ray as part of the MVD collection. It's also available on Amazon Prime as of this writing, in a fine transfer that more than likely comes from the same place the Blu-Ray is sourced from.


Angel Town is a classic example of what was on video store shelves starting in the early 90's. As good as many aspects of it are, it overstays its welcome with its unnecessarily long running time. Though it does overextend itself, there are definitely bright spots throughout Angel Town.

Thanks for reviewing this. After reading your review I found this movie on YouTube and watched it for the second time. The first time was when I rented it from the video store in the early 90s. Man how I miss those stores. The fight choreography was really solid.

You're welcome! Glad it's around more for people to check out. Agreed on the fights, got to love Gruner.