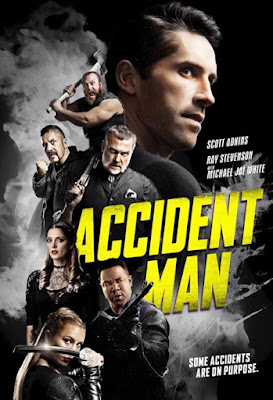 
Mike Fallon (Adkins) is part of a firm of hitmen (and one hitwoman) who each have their own specialties when it comes to killing. Some are brutal, some are careful, but Mike's own unique brand of offing his clients comes in the form of making their demise look like an accident. He was brought up under the wing of Big Ray (Stevenson), his mentor and fellow hitman who now runs the local pub where all the hitpeople congregate.

When his beloved Beth (Brooke Johnston) becomes the target of assassination, Mike goes rogue to find out who ordered the hit. While it's bad that this course of revenge shatters his carefully-crafted life, the really bad part is that he is then the subject of a dreaded "Kill Brief" and all his former compatriots now come after him, and he has to fight his former friends and expert killers one by one. Will he finally get to the truth? Will it be a conspiracy that goes all the way to the top? What will become of the ACCIDENT MAN? 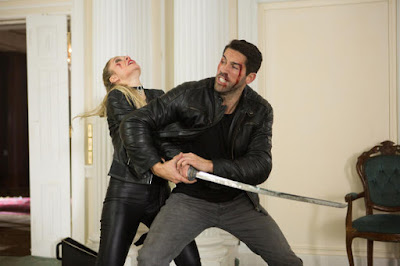 Not to be confused with the Yahoo Serious romp Mr. Accident (2000), Accident Man is an entertaining good time starring the ever-reliable Scott Adkins. He's joined this time around by a very solid cast of fan favorites such as Lady Bloodfight herself, Amy Johnston, as well as Ray Stevenson and Michael Jai White, among others. Adkins and White have not one, but two fights together and the action overall is well-executed. There's a strong sense of humor throughout and a lot of good energy propelling it all along.

It appears the story was based on a comic book, and that feel is definitely there. It's like a DTV Guy Ritchie movie, but better, and there appears to be a healthy dose of the John Wick series added to the mix for some extra flavor.

But the whole thing is uniquely British and Adkins really seems in his element here. There are several references to their English identity, including pro-Brexit sentiment. Two songs by The Jam are on the soundtrack (can you guess which ones?) and Adkins does a very enjoyable voice-over narration of the tale. The soundtrack has some nice synthy moments that 80's fans will appreciate. 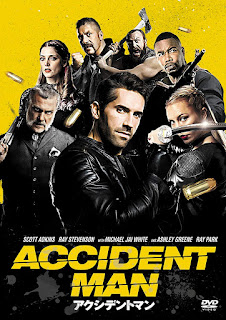 Speaking of 80's classics, we have Michael Jai White screaming while shooting a machine gun and a classic barfight. The idea of a hitman club with its own unique characters, which then splinters and becomes a case of "best vs. the best" is an appealing one. It's done with style and you care about what's going on. It's all totally professional and should have gone to the theater here in the U.S. In days gone by it would have, but these days it doesn't have a chance at a theater release, sadly. But there's always Blu-Ray, DVD, and streaming services.

Scott Adkins and the gang have turned in another winner, and we absolutely recommend Accident Man.