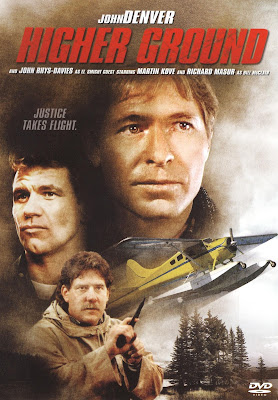 
Jim Clayton (Denver) is an L.A. FBI agent who isn't quite On The Edge, but he's getting close. So to prevent getting there, he relocates to Jordan, Alaska to start a new life as a bush pilot. While there, he reconnects with his old buddy Rick (Kove) and his wife and son, and pretty soon, all three are flying the friendly skies with Annakin Airlines. But perhaps things aren't as friendly as they first appeared.

It seems the nefarious McClain (Masur) has an illegal bootlegging operation running, and Rick gets caught in the middle of it all. So now Clayton must go it alone and find out the truth about McClain, the bootleggers, and just why alcohol is illegal in Alaska anyway. Will he fall on his face...or reach HIGHER GROUND?

Schwarzenegger. Stallone. Seagal. Van Damme. Denver. A pantheon of the action gods, I tell ya. To be fair, Higher Ground is a decent enough TV movie from 1988 that was also a pilot for a prospective show. And pilot is indeed the operative word, as Denver and Kove fly all over Alaska (or is it Canada?) in search of those dastardly bootleggers. 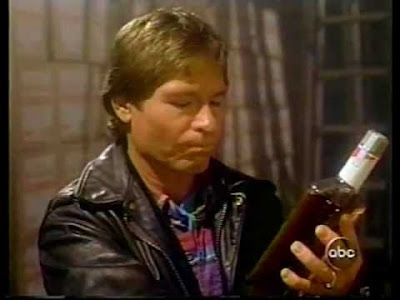 Because it was made for TV - and this was long before the dominance of cable - it's all pretty tame stuff. There's no real violence, no nudity, and no bad language. Despite what you may have hoped for, John Denver does not shoot anyone in the head. He doesn't go on any drinking benders, killing sprees, Punchfighting tournaments, or anything of the sort. Hell, he doesn't even get involved in any car chases. But there are exactly two scenes of Denver-Fu. That's right, he all but shouts "Rocky Mountain Hi-Ya!" as he beats up some dudes. Now that's entertainment. Those scenes should have been longer. Much longer.

So think Airwolf meets Northern Exposure, maybe with a dash of Wings, but without the humor. But I repeat myself. Hey, we kid Wings because we love Wings (or do we?) 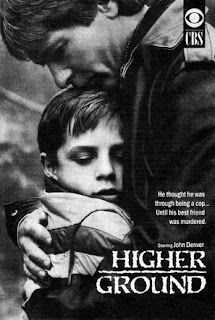 Anyway, John Denver looks like John Ritter meets Don Johnson. He's glasses-less this time around and he takes time out from his transition from FBI man to plane-flying man with a good ol' country singalong. Apropos of (almost) nothing, at a party, Clayton just happens to whip out his acoustic guitar and he plays the song "Alaska and Me" in its entirety. And the rest of the partygoers all know the words. It was a movie highlight for sure.

Denver is backed up with some solid support - Martin Kove as his buddy Rick was a more than welcome addition, and John Rhys-Davies as Lt. Smight, the Scottish-accented policeman on the case was a nice casting choice as well.

Richard Masur is another underrated character actor and he brought a lot to the role, which would have been much duller in lesser hands. But, as usual, one of the side characters steals the show. The local restauranteur, named Don, is a friendly, bearded man and he offers all his patrons his specialty of moose burgers. He was a great face and a great presence and we don't even know his name! But kudos to him nonetheless.

While he really should have mowed down many baddies with a machine gun in a Final Warehouse Fight a la Travis Blackstone, what we get is a nice, decent, middling affair that would have been perfect for the PAX channel back in the day. It could have been on after Doc in back-to-back programming featuring country stars turned actors. It should've aired in PAX's 10 o'clock timeslot for a slightly edgier, 'PAX After Dark' kind of vibe.

While it's not exactly unprecedented - Higher Ground is truly the Short Fuse of its day - to see a somewhat unorthodox John Denver taking the lead as a man of action seeking justice (however tepid) - Higher Ground is one of those oddball items that's more than worthy of a one-time watch.

Comeuppance Review by: Brett and Ty
Posted by Ty at 1.2.21