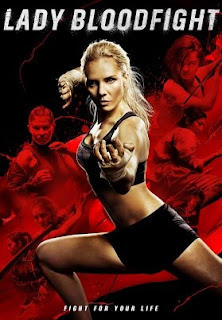 “Your arrival lights the flame of the Kumite.”

Jane Jones (Johnston) is a humble waitress in Pittsburgh.  Thanks to her father, she also has formidable fighting skills. She travels to Hong Kong to find out what happened to her beloved dad – all she knows is that he disappeared after becoming involved in the mysterious Kumite. Meanwhile, female fighters from all over the world are specially selected to fight to the death in said Kumite. Trainers and rivals Shu (Hoffmann) and Wai (Kathy Wu) each take on a student to represent them in the tournament because when they last fought each other, they refused to split the prize winnings. We’re not entirely sure how that works either, but Wai trains a street tough named Ling (Jenny Wu), while Shu does the same for Jane Jones. Will a blonde American woman come out victorious in the Kumite?


We’re definitely happy that an all-female Bloodsport (1988) or Kickboxer (1989) exists, especially in this day and age. Just when you thought the Punchfighting genre had run out of gas, along comes Lady Bloodfight – where women now have to endure grueling training regimens so they can punch each other into oblivion. 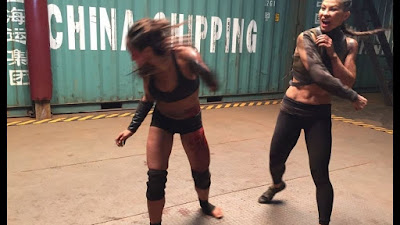 There’s a lot to like about the movie – the cast is engaging, it’s well-shot and looks good overall, it’s entertaining, and the concept of all-female underground Punchfighting is a solid one. The fact that it was co-written and co-produced by Bey Logan of Dragon Dynasty fame, and directed by Nahon of Kiss of the Dragon (2001) fame just enhances its bona fides. There’s even a mention of Dim Mak, as there also is in Kiss of the Dragon. Nahon must love the death touch. On the downside, the movie is too long at 100 minutes. The thin plot doesn’t really justify this length – that and the constant tournament fighting scenes will remind you of The Quest (1996). But one thing you have to say is that it doesn’t skimp on the action. There’s a fight scene seemingly every few minutes, and most of the fights are well done.

Interestingly, nothing is said about this being an all-female Kumite. It just is. Other movies would make a big deal about it. Here it’s not even worth a single mention. Another thing worth noting is that Jane Jones is far from an invincible, flawless heroine – she gets beat up a lot, so much so it’s amazing she can stand up, much less fight, but there just may be a reason why that is…

Action fans will feel comfortable with the dubbing style and training montages, not to mention the near-constant fighting. Of course, the Kumite matches primarily take place in an abandoned warehouse. Jones even has to face off against a fearsome villainess, or “Tong Poette”, as we called her.


All in all, Lady Bloodfight is well worth-watching, and we look forward to seeing what Amy Johnston does in the future.