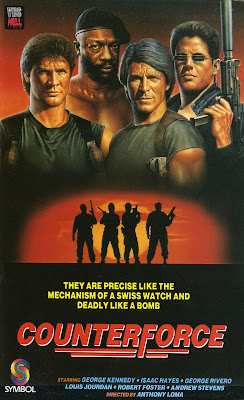 Somewhere in a foreign land, The Dictator (Forster) is causing trouble. No real surprise there, unless you consider the fact that he's known only as "The Dictator". Even the news reports about him call him that. Because there's a pro-democracy politician named Kassar (Jourdan) who opposes The Dictator, the U.S. sends in the COUNTERFORCE to protect him because he now has a target on his back.

Counterforce, who have their own, specially-branded hats and jackets so you know it's them, is an elite squad of soldiers who are the best of the best. They consist of Colby (Kennedy), their leader, Nash (Stevens), the spiritual guy who likes zen and meditation, Ballard (Hayes), the muscle, Harris (Rivero), who leads the men in the field, and Sutherland (Bernhardt), who everyone calls "flyboy" because he likes planes. Will the Counterforce protect Kassar and put an end to the reign of terror of The Dictator?

If you like the A-Team, you'll probably like Counterforce. It's very, very A-Team-esque. The whole movie plays out like a feature-length version of the show. Each member of Counterforce corresponds to an A-Team character. Instead of Mr. T, they got Isaac Hayes. Instead of George Peppard, they got George Kennedy. Of course, for the characters of Face and Howling Mad Murdock, they got Jorge Rivero and Andrew Stevens. And Kevin Bernhardt. Even the shooting, car stunts and blow-ups seem heavily inspired by a certain 80's TV show. And it's not Mama's Family.

Now that that's out of the way, we can talk about the main reason why anyone would go out of their way to see Counterforce: the cast. It's an impressive lineup of B-Movie favorites and regulars. You get Robert Forster as an out-of-control Arab dictator, complete with an indefinable accent and a proclivity towards wearing capes over his normal clothes. There's Jorge Rivero, who last starred in director De La Loma's Killing Machine (1984), AKA Goma-2. He's very no-nonsense this time around, and his ability to load a pistol one-handed is very impressive.

Andrew Stevens and Isaac Hayes are the original odd couple and provide most of the humor in the film. George Kennedy, as usual, holds things together. At this point in his career, Kevin Bernhardt was on the ascendancy, as Counterforce was sandwiched in between Kick Or Die (1987) and Midnight Warrior (1989). Whether those qualify as video store classics is debatable, but it seems Bernhardt was everywhere in the late 80's. 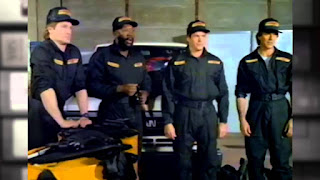 As if all that wasn't enough, familiar faces such as Louis Jourdan, Simon Andreu, and Hugo Stiglitz round out the cast, which was truly international. The only real female cast member, Susana Dosamantes, was a mainstay in Mexican movies and TV but is probably best known for being in Rio Lobo (1970) with John Wayne.


While there are a handful of cool bits and some nice, mild humor, it's all very standard. It's an El Presidente slog by any other name. Yes, the scene in the gym where the Counterforce are all lifting weights, except for Andrew Stevens, who is meditating, is a highlight, but it's all so middle of the road.


Counterforce is by no means a failure, or even unpleasant to watch, but nothing about it stands out enough for us to give it a wholehearted recommendation.

I thought this movie was great, but I’m a sucker for A-Teamesque and El Presidente flicks. Happy to see you are continuing the blog into 2021.

Thanks! The website and podcast will be going for a long time to come! For anyone out there who likes this type of movie, this is a good example.