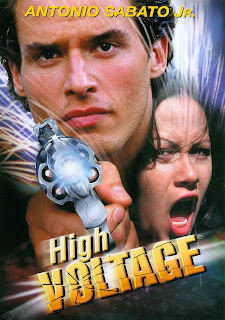 
Johnny (Sabato Jr.), Larry (Munro), Molly (Smart), and Sam (Mains) are a bank-robbing gang and they sure do love their guns. Their luck runs out when a particular bank that they rob is a front for the Vietnamese mafia. Now Victor Phan (Cheung) and Harry (Lew), among many other goons, are after them. So is a biker named Bulldog (Zabka). Of course his name is Bulldog. The final showdown occurs at a run-down hotel managed by Carlo (Sabato Sr.) – who will come out on top in this gang war?

In 1998, we were all living in a post-Tarantino, post-John Woo world. Director Isaac Florentine seemingly decided he should try his hand at a mélange of the two directors’ styles, but complete with his own trademark “whoosh” sound effects. Thanks to fight choreographer Koichi Sakamoto and Florentine himself, the fight scenes are well-done and fun to watch. Hence, High Voltage shouldn’t be classified as a Tarantino slog, necessarily, but in the non-action scenes, it gets fairly close.

Yes, there is a lot of inconsequential, post-dubbed dialogue in between the action scenes that viewers probably won’t really care about. But then a, frankly, High Voltage action scene will arrive and things perk up a lot. Thrill’s Antonio Sabato Jr. not only flies sideways while shooting two pistols, he flies frontwards while shooting two pistols as well. There’s plenty of top-notch stuntwork going on and the action setpieces are very enjoyable.

Thankfully, William Zabka screams while shooting a machine gun. The movie overall could have used more Zabka. He sports a very 90’s “grunge” look throughout the film, as it was the 90’s after all (though if memory serves, grunge was fairly well out the window by ’98. That didn’t preclude the inclusion of a song called “Trashgrunge” on the soundtrack, however). 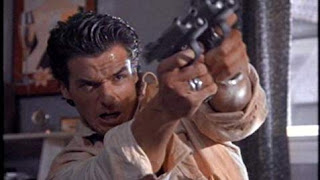 Also helping things are the presences of fan favorites James Lew, George Cheung, and an uncredited Donald Gibb as a bartender. It was also nice to see Antonio Sabato Sr. join the fray. Interestingly, Amy Smart, as you probably well know, was in Crank: High Voltage (2009). Surely this must mark one of the few, if only, times an actress appeared in an action movie, then, over ten years later, was in another film with the same title (although, granted, it’s a subtitle in the latter case). Still, worthy to point out, I think.


Featuring a “greatest hits” recap before the credits, not during them as certain Jackie Chan films do, High Voltage has its flaws – pretty much the plot and dialogue department – but makes up for it in the action department. That being said, it was probably one of the best things coming out on video store shelves at the time – the late 90’s/early 2000’s being a notoriously fallow time for quality DTV product. For the action scenes, we say give High Voltage a watch.

Anything Tarantino-esque makes me want to scream: I got no time for the jibba jabba!

Haha same here! You and Mr. T are right.