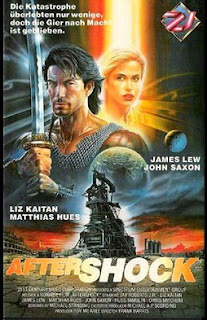 
In a post-apocalyptic world, society is broken up into fascist-type overlords and their minions who try to control the population, and the rebels who fight the baddies for their freedom. Everyone in society is required to have a barcode on their arm. However, the underground resistance is gathering steam with their "Start To Question!" campaign, which they push through flyers, spray-painted walls, and other means.


The catalyst for the ultimate battle between the Empire and the Rebels is a beautiful extraterrestrial named Sabina (Kaitan). Baddie Oliver Quinn (Saxon) wants to experiment on her, but rebel Willie (Roberts Jr.) wants to run away with her. Will it be World War III...again?


Aftershock may be one of the many, many post-apocalyptic movies out there (we call them post-ap's for short), but it has a handful of things going for it that its competitors don't. Its Star Wars-esque plot allows for some actual ideas to come forth, which is more than some of the others can claim. Also, on the whole it's a lot better than, say, Bloodfist 2050 (2005) or Dragon Fire (1993). It's directed by Frank Harris, who is very well known to us from his action films of the 70's and 80's, and the whole thing gets funnier and more enjoyable as it goes along. By the halfway point, things really start to pick up. 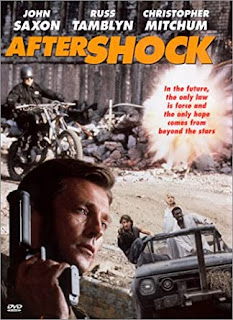 But, unquestionably, Aftershock has one of the best B-Movie casts ever. We don't say that lightly. Somehow Harris was able to corral an amazing bunch of people - and the whole thing doesn't even fall prey to Lone Tiger Effect. Sure, with such a cast, not everyone gets all the time in the spotlight they perhaps should, but the movie overall is far from a dud. Here's a breakdown:


- Jay Roberts, Jr. as Willie, the rebel with the earring, motorcycle, rattail, and Martial Arts moves is the main hero and love interest for Sabina. We hadn't seen him since White Phantom and were glad to see his triumphant return.
- Chuck Jeffreys as Danny, Willie's sidekick. His energy, athletic ability, and Eddie Murphy-esque charisma was more than welcome.
- Elizabeth Kaitan as Sabina, the alien. Her transformation from clueless creature from another world to wise woman was genuinely charming. She learned all she knows by soaking up the info from a container of floppy disks (as we all did back then...though isn't this the future? Anyway...) and it's well-noted that she wears fireproof clothes.
- John Saxon as the evil Oliver made the perfect main baddie. If he's the Darth Vader, then...
- Richard Lynch as Commander Eastern was the Emperor. He wasn't in it that much but it was nice to see him.
- James Lew was one of the enforcers, and...
- Chris DeRose was one of the others. Both were heavies but DeRose looked more like Chris Noth than ever.
- Chris Mitchum - we haven't even gotten to Chris Mitchum until now! Normally his presence alone in a movie would be enough for us. Here he's one of the rebel commanders. You can always use more Mitchum but what are ya gonna do?
- Matthias Hues is a hulking, punchfighting, almost Conan-esque brute. He doesn't say anything, but his partner in crime is none other than...
- Michael Berryman - even by his standards his character is extremely bizarre, a cross-dressing fighter of the wasteland.
- Russ Tamblyn is also on board as a bartender and good guy. What little screen time he has, he makes the most of with a sympathetic character.
- Al Leong and
- Gerald Okamura both have blink-and-you'll-miss-em cameos as fighters in some of the Punchfighting/battle scenes.


This reads more like the lineup for a convention like Chiller Theatre than a cast list for one movie. For the cast alone, Aftershock is worth seeing. The post-ap aspects (post-aspects?) aren't amazingly different from others of its ilk, but the main difference is the terrific cast. 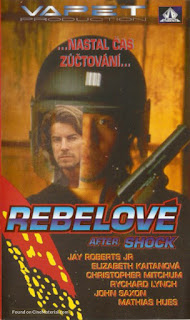 Filmed at the Kaiser Steel Plant in Fontana, California and the Domtar Gypsum Paper Mill in Vernon, California - because obviously places where they used to make paper and steel now look like bombed-out wastelands - Aftershock does have some standout moments, mainly after the halfway point, and the cast is fantastic. That should be enough for at least a one-time watch.