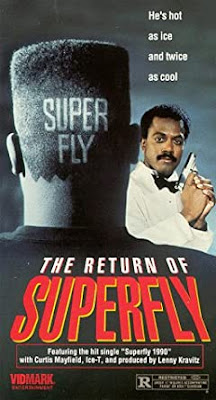 After living in Paris for some years, Youngblood Priest (Purdee) returns home to his old haunts in New York City. He is dismayed to find out that crack and violence rule the streets in 1990 and there is no honor among thieves like there used to be. He's been out of "the game" for so long because, supposedly, he's been running a legitimate business.

He turns to his friend Nate (Jackson) for help and information, but Nate is a crack manufacturer and tied in with the drug gangs. When certain people in Priest's life not-so-mysteriously start dying, he then teams up with Willy Green (Wells), a heavily-armed survivalist type. The aim of the two newfound friends is to get revenge for the death of Priest's friends. Will they do it?

What's good about The Return of Superfly is that it's not at all slick. It's a low budget, gritty look at the New York City of the day, with songs by Eazy-E and King Tee on the soundtrack. Not to mention a pre-Freedom Strike Tone-Loc. Characters wear thick gold chainses and are hustling the best they can. Although, beware: the community might just band together to expel a local pimp.

Yes, to state the obvious, Ron O'Neal is not Superfly this time, but he's got a solid replacement. We enjoyed Nathan Purdee in the main role, although we couldn't help but imagine Billy Dee Williams or, perhaps more realistically, Ivan Rogers as Priest. Tico Wells as Willy adds a lot to the proceedings and is very likable. A young Samuel L. Jackson is also here, and he wouldn't be seen here on Comeuppance until Arena (2011). Leonard Thomas as Joey, one of the evil baddies, stands out with his inimitable laugh. Once you hear this guy chuckle, you may never be the same. 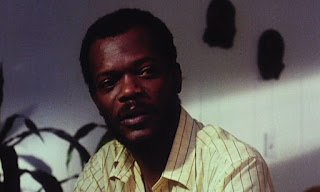 It all opens with a bang (a very silly bang), but, in all fairness, The Return of Superfly falls victim to some very common pitfalls of low-budget filmmaking, namely some poor lighting and the plot sags in the middle and it slows down a bit too much. It could have used someone like Lawrence-Hilton Jacobs to liven things up. All in all, it should have been more like director Sig Shore's prior film Sudden Death (1985) - a movie we prefer to this one.


Perhaps it could be said that The Return of Superfly is the first (or, certainly, one of the first) of what came to be called "Homie Movies". In that sense it is a pioneering film - the Homie Movie boom of the 90's owes a lot to not just the original Super Fly from 1972, but this entry in the series as well.

Finally, we'd just like to note that there is a club scene where people play stand-up arcade games such as Rampage and (we think) Pole Position (we tend to point out things like that), and certain scenes are filmed in and around the Stamford area in our beloved home state of Connecticut (whenever there are Connecticut-filmed scenes in movies, we tend to point those out too).

For those who may not know, Stamford is right outside New York City and such cinematic classics as Seagal's Pistol Whipped (2008) were also shot there. It's also the city where director Sig Shore sadly passed away at the age of 87. For the Super Fly series and Sudden Death alone, he will always be remembered.


Final words: we liked the street-level grittiness of The Return of Superfly, and the fact that Purdee as Priest comes back to a new world of crack and violence he doesn't quite understand, was a solid idea. Although it could have been a bit snappier overall, we say check it out if the early days of the "Homie Movie" float your boat.

This movie was better than it had any right to be. It is, after all, a sequel to a movie almost twenty years after the fact. Very well written review, as always.

Thanks as always, Roger!

This is seriously one of the best film sites ever. Any chance of you guys doing a best of list(s)? Would love a post on your top genre favorites.

Anonymous: We agree, Leon Isaac Kennedy would've worked and and maybe he was busy working a Penitentiary sequel at the time

Illtiger: Thanks for the kind words! Take a look at our "Four stars" tag and you'll see our favorites. Also check out our podcast, Comeuppance Reviews Podcast for more suggestions. It's on itunes and othe podcatchers.