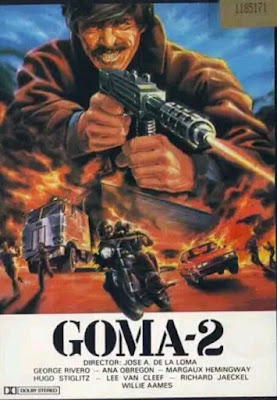 
Txema Basterreneche (Rivero) is a simple truck driver who has enough problems in life with people trying to pronounce his name. The last thing he wants is more trouble. But that's just what he gets as he travels the highways between Spain and France as he hauls fruit. Evidently there is a French Produce Mafia who don't take kindly to Txema's fruit runs. The guys in the FPM (we assume that's the union initials for French Produce Mafia) are constantly calling Txema "That damn Spaniard" and "That Spanish bastard". Harsh words indeed, but things escalate from name calling and fruit-stomping to murder when the FPM burns Txema's truck - with his beloved Elisa (Obregon) inside.

Now burning with revenge, Txema hooks back up with former colleague Jacqueline (Hemingway). It seems that in their past, they were both part of a mysterious - and deadly - "organization". Now falling back on his old ways and killing skills, Txema starts taking out the trash - which is, in this case, a bunch of French produce truckers. Picot (Sambrell), Koldo (Stiglitz) and boss Martin (Jaeckel) are all on his list, but Txema eventually works his way up to the final showdown with arch-baddie and produce lawyer Julot (Van Cleef). Will Txema execute his final mission? And what does Tony (Aames) have to do with all this?

Well, you gotta give Killing Machine points for originality. We can't say we've ever seen what we would have to call produce goons before. That's right, produce goons. If you watch enough movies, and dig under every rock, you're bound to find something at least a little bit new and different. Despite some pacing issues, Killing Machine (AKA Goma-2, which is apparently some type of explosive), is enjoyable enough - a sort of European take on F.I.S.T. (1978) meets Death Wish (1974). 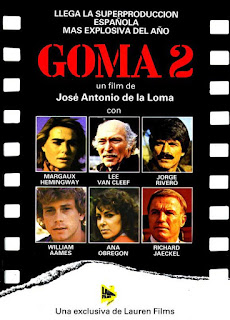 A solid cast and music by the De Angelis brothers also help things along nicely. Revenge movies are among our favorites and it was nice to see fan favorite Jorge Rivero do what he does best. Evidently that includes punching French truckers. (How often do you get a chance to write - or read - the phrase "punching French truckers"? You gotta love it).

It was nice to see Margaux Hemingway, as she doesn't pop up too often around these parts, and you really have to appreciate her eye for art and home decor in the film. The legendary Lee Van Cleef was terrific as the main baddie, definitely a "boo-hiss" situation, and Richard Jaeckel as his underling was okay, nothing spectacular.

The rest of the Spanish-language cast was fine too, including mainstays Sambrell and Stiglitz. The team-up we've all been waiting for, Jorge Rivero and Willie Aames, finally appears here. The rumors appear to be unfounded, as of this writing, that Willie Aames has legally changed his name to Willie Bibleman.

For an under the radar - or should we say under the CB - revenge film that should be more well known, do check out Killing Machine.
Comeuppance Review by: Brett and Ty
Posted by Ty at 22.9.20