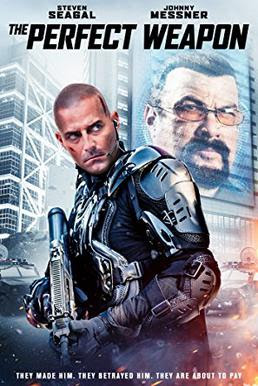 
Axon Rey, code-named "Condor" (Messner), is a hitman who lets his silencer-laden guns do the talking. (Mostly what they say is "pew pew"). In the year 2029, we all live in a dystopian future controlled by The State. There is an underground freedom movement trying to disrupt the all-consuming central powers of our evil government.

That's why The Controller (Tyson) runs Condor and tells him who to mercilessly kill. Haunted by memories of his lost love Nina (Jackson), Condor begins to question his life and his missions, which leads him down a road of no return. Naturally, the evil dictator is Steven Seagal as "The Director". What will become of Condor, and his status as THE PERFECT WEAPON?

Wait. Isn't there already a movie called The Perfect Weapon, starring a certain Jeff Speakman? You would think makers of action movies would know this, and pick a different title. How quickly have they forgotten "No Gun. No Knife. No Equal"? Anyway, get ready for Hitman (2007) meets Blade Runner (1982), DTV-style, with a sprinkling of Seagal added into the mix. 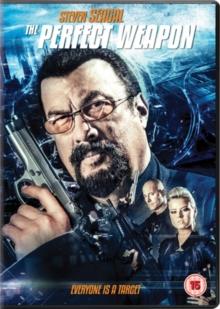 After the near-countless production company logos that precede the film, we see a future where, in true Blade Runner style, giant electronic faces of Steven Seagal are illuminated on skyscrapers as he watches us all. This is not a future I want to be in.

Messner as Axon Rey, AKA Condor - not to be confused with Comdor from The Silencers (1996) - is strongly reminiscent of Mark Strong. At least he's a tough-guy hero and not a fey millennial as we've been seeing lately. Of course, there is the Prerequisite Torture of the hero, along with all the gun-shooting and beat-em-up action.


Most importantly, though, he talks to his home personal assistant, which is a crystal/plastic pyramid like the one Evie talks to on Out of This World. While, on the whole, there is perhaps a bit too much of the romance subplot, which slows things down, we see why the filmmakers went that route. There's an actual reason but we won't give it away.

It was nice to see fan favorite Vernon G. Wells, but it was a missed opportunity to have him be in the cliched torturer role. He should have done something more interesting, like maybe punch Seagal in the face. Our old buddy Seagal isn't in the movie much overall, but it does seem that he has a strong southern accent in the beginning, but completely loses it at the end. He only does minimal Martial Arts, and it's at the final battle. He wears loose-fitting black robes. We'll just leave it at that.

The Perfect Weapon is in no sense original, but it is made well, especially for the budget. It's better than a lot of other DTV product out there, but once again there is an over-reliance on CGI when there needn't have been any at all. It's not overly long, which is more for the win column.

It won't change your life, but there are certainly worse ways to spend your time.

Also check out write-ups from our buddy, DTVC! and The Video Vacuum!