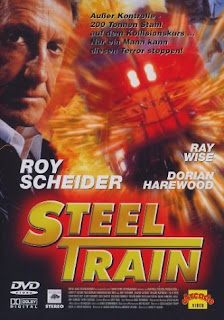 When a group of dangerous criminals has to be transported, they’re corralled into a train car which is attached to a regular passenger train. Nothing good can come of this scenario, and, you guessed it, all hell breaks loose. When criminal mastermind Enzo Marcelli (Scheider) breaks his evil compadres out of their chains and commandeers the train, Sheriff Blaidek (Wise) is called in to handle the situation. The hapless and sympathetic prisoner Luke Sinclair (Harewood) is caught up in a situation he can’t control and must become the de facto hero. Will the train reach L.A. as it should…or will EVASIVE ACTION be needed?

Funny how these prisoner transports never go right. You’ve never seen in any movie a group of prisoners being shipped from one location – either by van, truck, train, plane, boat, or hovercraft – and then end up at their intended destination with everyone completely unscathed. They should really stop transporting prisoners altogether. Just leave them where they are. 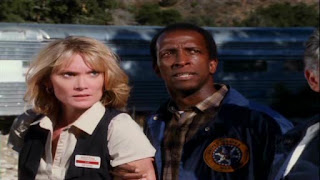 Anyway, it’s rather obvious that this is the DTV version of Con Air (1997), except it’s Con Train. As far as DTV train movies go, Evasive Action is better than Death Train (2003), Operation Delta Force (1997), and Derailed (2002), but not nearly as good as Hostage Train (1997). As far as Under Siege 2: Dark Territory (1995), it’s up to you to decide. Just why DTV filmmakers thought audiences would be so fascinated with trains remains unknown. It’s not exactly new technology. It’s not the 1800’s anymore. Presumably they thought countless people would see these train movies on video store shelves and shout “Coooooollll!!!” or “These people are on a TRAIN!! WOwwww!!” Surely there are some train fanatics out there, but how many could there be – and why did DTV filmmakers court them so heavily?

While Evasive Action itself is rather middling, at least the cast is here to help buoy it somewhat – of course there’s Roy Scheider, doing a standard baddie, Don Swayze doing a standard underling, Ray Wise is a standard Sheriff, and Ed O’Ross is a standard warden. Clint Howard isn’t exactly standard like the rest, but his character is really annoying, so I guess it’s for the wrong reason.

We were happy to see Dorian Harewood step out of the shadows of being a bit part or sideman-type actor. This has to be one of the few times he takes the lead, and we were glad for that. He’s rivaled only by one Mallory Farrow as Alex, one of the precocious little girls that these movies tend to have. Oh, and Dick Van Patten does a brief sit-down role as “Parole Officer”. It’s just like in A Dangerous Place (1994) where he played “Principal”. He deserves better – at least give his character a name.

Most of the funny stuff is saved for the end, and the end-credits song, “No Excuses”, is sung by Dorian Harewood himself. He did release an album in 1988 so it wasn’t his first rodeo behind the microphone. The song is one of the better things about Evasive Action.

It seems DTV producers around this time period had a “one-track” mind when it came to trains. Evasive Action is not the best, nor is it the worst, of this bunch. The cast helps keep it from going completely off the rails. But it’s not what we’d call a must-see.

Comeuppance Review by: Brett and Ty
Also check out write-ups from our buddies, Exploding Helicopter and Cool Target!
Posted by Ty at 28.9.20

I will watch anything with Roy Scheider in it. As someone who is also blessed with a large schozzle, I admire anyone who call pull it off with such style.

And I've yet to see a prison transfer go right. Sicario is the only one that comes close. And it only goes right in so far as its the bad guys who get massacred for once, and not the poor guards.

Matthew: We agree, it usually doesn't go to well with the transfers, We just discussed prison transfers gone wrong on our podcast! Take a listen to episode 25 for a discussion about that.

Anonymous: So very confusing! All we know is the funniest one is when they dressed up Treat Williams in a brown bomber jacket\red shirt so the footage matches last action hero in the movie Gale Force. Haha