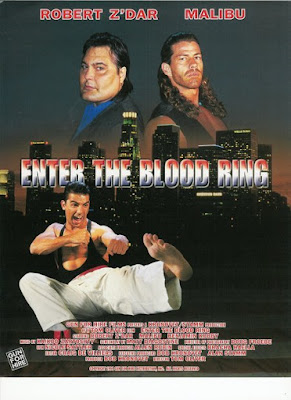 After the death of his wife, Punchfighter Luke Genera (Kobby) is struggling to take care of their son, Adam. Sadly, Adam has a brain tumor and Luke's day job as a cab driver isn't making ends meet, so he fights in underground Punchfighting matches at night. His goal is to save up enough money to move from L.A. to Australia because they're working on an experimental new treatment for tumors there. When gangster/fight promoter Sal D'Angelo (Z'Dar) announces a tournament where the winner walks away with $500,000, Luke trains like he's never trained before. Will Luke come out victorious after he decides to ENTER THE BLOOD RING?

Enter The Blood Ring appears to be one of the lesser-seen entries in the Punchfighting genre, at least here in America. It seems its low-budget origins ensured that it didn't get much penetration into the marketplace, even though video stores were hungry for this sort of thing at the time. You'd think that the presence of Malibu alone would guarantee it would be on every video store shelf in the U.S., but unfortunately that didn't turn out to be the case.

Star Benjamin Kobby (AKA Ben Maccabee) puts in a very Steven Niijar-esque performance. While he does tend to mumble (and have an accent), the audience warms to him because he has a likable personality and he's not fighting for personal or monetary gain, he's doing it to save his son's life. 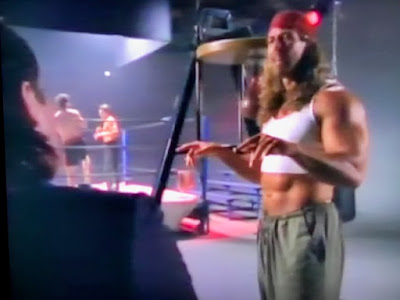 Apparently this was based on a true story, but is that itself true? We may never know. He also wears a suede vest and no shirt, and that is something we do know for sure. The fact that he's a likable cab driver/fighter drawn into the world of L.A. gangsters will inevitably draw comparisons to Lee Canalito and The Glass Jungle (1988).

One thing The Glass Jungle doesn't have - or any other movie that we can name, for that matter - is a gangster who looks like Jerry Seinfeld but speaks like Marlon Brando. This very unusual and jarring combination of traits is something you just have to see. His scenes with Z'Dar are quite bizarre (or should we say B'Zar?) 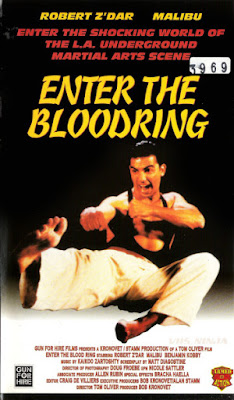 Further setting itself apart from others of its ilk, ETBR has these interstitial black and white bits where different fighters are being interviewed. There's a subplot about a writer named Thompson who is writing a book about underground fighting, so he goes around with his video camera conducting interviews. Interpolating this "mockumentary" into the main thrust of the film was a nice idea and it helped to move things along. It almost could have been a full movie unto itself.

There's the classic sax on the soundtrack and the classic wailing guitar on the soundtrack - sometimes these things are much louder in the sound mix than the dialogue, which seems to have been recorded quietly. But, any sound issues aside, the chance to see Ben Kobby, Malibu, Robert Z'Dar, Robert Chapin of Ring of Steel (1994) fame, Rod Kei of Ring of Fire (1991) fame, and T.J. Storm of The Ultimate Game (2001) fame all together is surely worth your time. (Storm and Chapin also starred together in Dragon Fury, for those keeping track at home).


For some classic mid-90's Punchfighting, do check out Enter the Blood Ring.