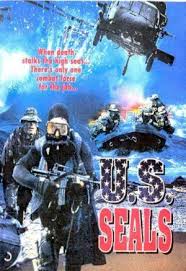 "Keep your eyes on the chicken."

Mike Bradley (Fitzpatrick) is the leader of a SEAL team which also includes his compadres Cosgrove (Collins), A.J. (Miller), Gaines (Williams), and Gepson (Francis). They are routinely sent around the world to dangerous hotspots to do what SEALs do best. Unfortunately, some of the baddies involved in one of their raids enacts a tragic retaliation on Bradley's family. Now burning with revenge, he travels to Albania (of course) to get justice. Along the way, he and his team enlist the help of the mysterious Lucia (Du Mond) - but where do her allegiances truly lie? Will Mike Bradley and his team be the ultimate U.S. SEALS?


What's interesting about U.S. Seals is that it starts off as your standard military slog - you know, the standard, run-of-the-mill type of thing you've seen countless times before. At about the midway point, however, it becomes more of a revenge movie. Against all odds, it picks up steam and becomes more entertaining than it was before. So, that does set it apart from some of its contemporaries.


One of its many problems, however, is that it needed more of a name to help things along. Someone like a Damian Chapa, Nick Mancuso, Arnold Vosloo, Jack Scalia, Antonio Sabato Jr., or maybe a Mandylor. Either Costas or Louis will do. The main guy is sort of Matt LeBlanc-esque and all the other actors seem like they would be more at home on a 90's TV sitcom like Friends or Seinfeld. Odd for a military outing like this.


The turnaround from just a plain 'movie on a screen' to an enjoyable revenge plot was the neat trick that U.S. Seals pulls off. Still, you never get to know the characters all that well, so it makes it harder for us, the audience, to care about their plight. But it transforms nicely enough starting from the second half, we suppose.


Of course, there's all the military jargon and mindless shooting you could ever ask for. It's easy to see why the great Isaac Florentine stepped in to direct U.S. Seals 2 (2001). He gave the second installment a lot of life and pizazz, as he usually does. So that was a smart move on Nu-Image's part to bring him into the mix, even if it was just to change things up.


Other items of note: both pagers and minidiscs are seen on display, there are some classic old-school guard-tower falls for fans of that, Bradley's son seems to develop a foreign accent about 45 minutes into the film, and when one of the SEAL team members jumps from a train, he yells a very half-hearted (and thus very funny) "Aaaaah."

The main (naturally and cliche-edly Eurotrash) baddie looks like some sort of genetic melange of Kurt Loder, Michael Pare, Sam Donaldson, Peter Jennings, and what Jerry O'Connell will likely look like in the future. But mostly Loder. Instead of preening about and/or fighting our main hero in the time-honored final fight, you think he and Tabitha Soren will deliver us the MTV news.


So, while the first half may be your workaday military slog, the change of course puts U.S. Seals in a somewhat unique position among DTV SEAL movies of this ilk. Is it an all-time classic you must run out and see immediately? Hardly - but fans of this sort of thing may appreciate some of the differences here.

Comeuppance Review by: Brett and Ty
Also check out a write-up from our buddy, The Video Vacuum!

This was my favourite in the U.S. Seals trilogy.

Cool! I think we prefer U.S Seals 2 more. :-) It's better than the third one. Florentine helped the second one a lot.